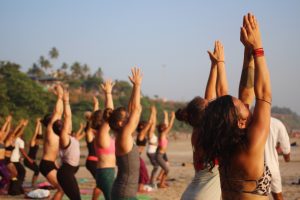 Looking through the spiritual eye, the universe is the divine manifested. In every stone, in every tree, in every beating heart, there is the signature of a common creation. Birth and death are mere thresholds in an inter-dimensional journey. Self-discovery is the unlearning of fear and acceptance of love. You wouldn’t know what tremendous potential you hold if you don’t know how to peer deep within your Self, and this looking, this turning of the gaze inwards is yoga. The soul’s awakening to bondage and its attempt to assert itself, this is the process of spiritual life. When in all sentience you know you are not your body and you are not even the mind that is the beginning of true self-realization, the beginning of yoga.

Available in different formats, known in various labels as according to distinct practicing styles, the thousand year’s old mind-body and spiritual discipline is actually just one thing. Yoga is one consolidated worldview, which is essentially a spiritual worldview. If you are thinking spiritual and lost in confusion as to whether the movement-centric Hatha lessons will do it or the more delphic Kundalini style, it’s only the styles being split over.

Here is a primer to the two most important yoga styles of huge spiritual connotations:

This sub-school of yoga is centered upon earth-life and promotes the yoga or connection of compassion for all living beings. The Jivamukti method centers one spiritually so that she can overcome ignorance of and negative passions directed at other living forms. The instincts of jealousy, gluttony, selfishness, or any kind of angst towards other individuals or other beings find release through this special yogic discipline.

Dismantling the notion that humans are an alpha species with special privileges over other children of god that can be exploited to the ends of mankind, Jivamukti establishes non-violence, empathy, and compassion.

The five spiritual tenets of Jivamukti Yoga are as follows–

Yogi Bhajan, the revered grand master of yoga has explained our metaphysical structure as per Kundalini in details in one of his lectures from June 1970.

We have eight centers of God consciousness in the body, he says. The lowest rung is at the rectum, the next is situated along the sex organs of males and females. The one above is at the heart center, elevating us from our animal natures. The origin of love, compassion, and service is at this center, Yogi Bhajan says. The next high center is at the Throat. When consciousness resides here, truth becomes his nature. There is no place for deception and disillusionment. The energy body can rise further up, above the two eyes. At the level of the “third eye”, all knowledge of past, present, and future is known. Finally, there is the seventh Chakra, at the crown of the head. When your consciousness reaches this sublime level, your personality and ego become one with the Universal.

The asana and meditation of the Kundalini school are designed to raise one’s consciousness from the base to higher up.

Learn the effects of circulating energy through the different chakras:

Muladhara or Root Chakra– The feeling of individuality is enforced, of having a separate body, a separate personality, and a separate connection of your spirit with existence.

Swadhisthana or the Second Chakra- The origination of pleasure and the drive to procreate begin here.

Manipura or the Third Chakra- This is the power center, the source of digestive fire and regulating forces affecting our general psychological and physical health.

Anahata or the Heart Chakra- It is the seat of love, appreciation for nature, compassion, and empathy. Transpassing energy through here is the key to having emotional balance.

Vishuddhi or the Fifth Chakra- Consciousness at Vishuddhi purifies sense perceptions and lets one come to terms with the light and dark aspects of life.

Ajna or the Third Eye- One gain command over subtle body systems.

Sahasrara Chakra- Consciousness held at this chakra signifies complete realization of the Truth, reaching a realm beyond mundane human awareness.

Go all out spiritually driven, following these lines of yoga now!