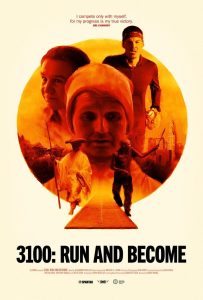 3100 Run and Become is a global exploration of running that focuses on the world’s longest race, the Self-Transcendence 3100 Miler, which requires people to average 60 miles a day within the 52 day window. The course is a ½ mile loop bordering a high school in NYC. That’s right – 60 miles a day around a sidewalk loop, and in the heat of the New York summer. Why do it? To answer that question, we went to cultures around the world that have prized running as a tool for transformation for millennia. We take the viewer to the Kalahari Desert, to the mountains of Japan and to the Navajo Nation in Arizona to reveal the spiritual truth that running can and does make us more spiritually attuned beings.

In the Kalahari, for example, Bushmen have been hunting on foot for over 125,000 years, chasing animals to exhaustion over 2 full days. Their persistence hunting practice is a window into how ancient humans survived before the advent of tools – we used our feet. But were we simply another type of animal chasing prey? The Bushmen would say “no”. They feel that running was not merely a way to fill a belly, but a means to access the higher power of both Nature and the Heavens.

When we traveled to the Navajo Nation, the same truth was reflected. To them and many Native Americans, running is a form of prayer. We use our feet to pray to Mother Earth as we breath in Father Sky. Running is a teacher and also a pure celebration of life. It’s what makes us physical beings, true – it ensures our survival. But running, to the Navajo, is what ensures our spiritual progress.

I wanted to make this film as a visual representation of why we run. The film isn’t just for runners, however. Running is just a metaphor to frame the narrative of our main character, a diminutive paperboy from Finland who is attempting to run the 3100 Mile Race. The film uncovers his physical and spiritual challenges and shows how running indeed makes him a wiser, more enlightened being.

2 Tell us a little about 3100 Mile Race. Is it really 3100 miles? If so, how long does it take to complete and where do people run it.  How many people start and how many people finish…What is training like for it?

The Self-Transcendence 3100 Mile Race is the longest officially certified running race in the world. It is in fact 3,100 miles, although most finishers probably run an additional 10 or 20 miles. They’re doing laps of a loop that’s measured to the thousandth of a mile if one ran the straightest line. But the 3100 is also on a sidewalk, so runners invariably have to run around other pedestrians adding a few extra steps per lap. But those extra steps add up over the 5000+ laps runners do.

Runners have 52 days to complete the race. The course is open 18 hours a day, from 6 am until midnight. The Race was founded in 1997 by Indian Spiritual Teacher Sri Chinmoy to challenge our conception of impossibility. Since then, nearly 14 people attempt the race each year with about ½ completing it. Most people train their minds as intently as their bodies. Folks put in 100-150 miles of slow running and walking each week, but they really focus on attitude. Problems on the course are minimized if one has a cheerful attitude. In that way, training becomes a spiritual practice in and of itself.

3. How can running become a sacred activity?

Running is inherently sacred. We should ask ourselves why it might not feel that way. Prayer can be repetitious. Prayer can be full of desire rather than being selfless. Similarly, our attitude toward running frames the experiences we will have. If we trust running to deliver us experiences of transformation, it will do so – that’s what humans have used running for across millennia. If we open ourselves to Nature and to the energies of the earth, if our breath is the “music” rather than the MP3 player, and if we really learn to open our hearts and emotions as we run, the effect can be instant and profound. We should ask ourselves “why we run” and focus on those reasons each and every run. 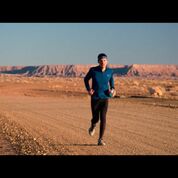 4. How would you respond to someone who says that this activity is just too much and “overkill”?

On the savannah, early humans ran hundreds of miles in pursuit of game. In non-agrarian cultures, which all humans were until 10,000 years ago, many civilizations were nomadic. Our bodies are built to move long distances, whether we enjoy doing so or not.

I would have agreed that the 3,100 might be considered as damaging. And that’s true of a lot of extreme activities. But, again, I see people coming back to do the 3100 over and over and over. It clearly wasn’t debilitating. But why do folks repeat this incredible feat? People mention that the sense of personal transformation is so profound that they long for the experience again and again. There is physical pain, but the immense spiritual joy that people feel during and after the race keeps them coming back.

5. What did you learn about yourself as you made the film?

Frankly, I realized how transformative running can actually be. I considered myself a runner but at the same time, I saw competition as the purpose of running. Now, I realize that Self-Transcendence is the purpose – that each run can add to our life experience; that each run can give me insight into my own human condition; and it works. I find that each time I run, I have a flash of inspiration or an insight into something I’ve been pondering or something totally random, yet relevant to my life. Running seems to open my mind to the truth in a way I never realized it could.

6. What sort of impact are you hoping this film has on other people?

In a hyper-politicized era, it’s hard, if not impossible, to feel any sense of unity. And I don’t think there will ever been unity of perception or ideology. Yet, when I run, I never consider the political, religious, educational, or ethnic backgrounds of anyone I see running. On the trails or the roads, we all have the same tools: our feet, our breath and our heart.

There are very few activities on earth that instantly take us away from prejudices or pre-conceived notions of identity – and running is one of them.

Not everyone needs to be a runner to enjoy this film. But I do hope that people see how something as simple as running can be such a great unifier and I hope this realization inspires them to find similar unifying forces in their own lives.

——-
For more information on the film, please visit its website at https://3100film.com