Ann E. Grant, JD, began her career as a corporate litigator specializing in unfair business practices and consumer fraud. After her own divorce she created her own firm, focusing on family law and a holistic approach to this life transition. She lives in Manhattan Beach, CA and her website is www.TheDivorceHacker.com. Below is a Q&A with her about her new book!

Can a woman in an unhappy marriage create a new and better life on her own?

Recently, a new study was published debunking decades of studies that married people are happier and healthier than their single counterparts. To the contrary, the study revealed that marriage does not mean better health, higher self-esteem, or long-term happiness. Every single finding favored single women. For example, the women who divorced ate healthier, exercised more, and had smaller waists than the women who stayed married—and single women are having more sex than their married counterparts! It is a powerful blow against the notion that marriage is the ideal way to live. 45 percent of all Americans aged 18 or older are single or divorced. In unprecedented numbers, women are living their single lives, which are often healthier and more fulfilling than those of their coupled counterparts. The weight of the scientific evidence is finally on their side.

How will the new tax law impact a woman going through divorce?

Are there steps women should take BEFORE filing for divorce?

If your marriage is in trouble, there are some key steps to take to protect yourself before you file for divorce.

Is it true that the divorce rate is going down?

The divorce rate in the U.S. for people 50 or older has doubled since 1990, according to a study by the National Center for Family and Marriage. As the American population steadily ages, gray divorces will keep rising:  By 2030, it is estimated that 800,000 will occur annually.

Has the use of social media led to more divorces?

Recent studies reveal that, not surprisingly, Facebook and Twitter users have a higher rate of infidelity and divorce. There are 40 million sexually explicit websites, chat rooms, bulletin boards, and interactive games available on the internet. An estimated 20 to 33 percent of internet users go online for sexual purposes; most are male, about thirty-five years old, married with children, and well-educated. Online sexual behavior is proving to be highly addictive to some users, and serious relationship problems are reported in almost all marriages in which one partner is cybersex addicted. As many as 17 percent of internet users become addicted to online sexual activity. This is a very real issue that is landing more and more people in my office.

Is the institution of marriage doomed to fail?

The historical institution of marriage was created hundreds of years ago to preserve wealth and create family alliances. It was NOT created to formalize a couples’ love and commitment. To the contrary, in early marriages, the husband almost always had concubines for the purpose of “pleasure” and the wife’s purpose was to procreate. Only in the last 100 years was marriage utilized to memorialize a couples’ love and commitment to one another. It is not surprising then that many marriages fail, since the institution was originally created for an entirely different purpose.

Do children fare better if their parents stay in a bad marriage, or is it better for children to be raised in a stable single-parent home?

Divorce has long been vilified by psychological experts who in the 1970s touted the idea that children did better in an unhappy home than a broken one. For the next two decades, this view on the devastating, long-term impact of divorce on children shaped the national dialogue. Since then, studies have shown that combative relationships, as well as cold and contemptuous ones, are oftentimes more harmful to children than break-ups. The key concept is stability. My book provides action items to create a stable single-family home.

If you are in marriage therapy trying to work things out, how do you know when it’s time to say “enough?” What steps can you take to protect yourself? (continued)

Many women think they can change their spouse, or that a marital counselor, therapist or religious advisor will bring him around and get him to cease his extra-marital activities. Having been taught to be patient and “carry on,” women often wait for their husbands to come around. But there is a very real and present danger to waiting. I have seen many cases where women are in marriage therapy with their husbands for years, while their husbands, pretending to have an intention to mend things, are secretly carrying on an affair and hiding assets. Women need to understand the signs to look out for and take proactive steps to protect themselves. I provide concrete guidance in the book about specific steps to take to avoid this trap.

What have celebrity divorces taught us about untying the knot?

A multi-billion-dollar industry has been built around not just celebrities, but “regular” people who are going through divorce. In Divorce Hacker, I blow open the divorce industry and reveal the insider secrets the divorce professionals don’t want you to know. I give specific advice about how to deal with lawyers, mediators and the professionals who claim to serve those going through divorce, but are often interested primarily in lining their pockets at their clients’ expense.

Why do you suggest unemployed women get a job prior to filing for divorce? 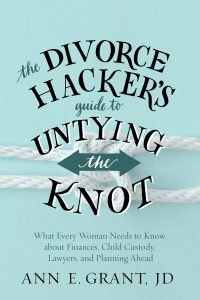 Even in long-term marriages, the idea of permanent spousal support is misleading. In this day and age, unless you are disabled or retirement age, judges expect spouses to contribute to their own support. Failing to become gainfully employed, if you are able to do so, can backfire. A judge can impute your “earning capacity,” even if you choose not to work. In other words, if you are capable of earning $50,000 per year, but you choose not to, the judge can include that unearned income in the support calculation as though you were earning it. So, if you are able, it’s better to become gainfully employed, then to assume that your spouse will be ordered to pay you support sufficient to maintain you at the marital standard of living for the rest of your life.

Why is the book organized around months during the divorce instead of subject areas?

The book takes a chronological approach to working through the legal tasks as well as the financial, custody, career and real estate issues. There are so many things to deal with when faced with divorce that it’s common to feel overwhelmed and frozen. Divorce Hacker breaks each month down into manageable tasks while also making time for yourself. This approach allows you to stay grounded and focused, so that you can create the life you want in a thoughtful way—rather than just reacting.

Should women always insist on keeping the family home and work extra hours to afford it?

The Divorce Hacker’s Guide to Untying the Knot:

What Every Woman Needs to Know about Finances, Child Custody,
Lawyers, and Planning Ahead By Ann E. Grant, JD