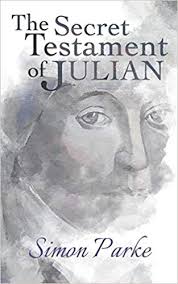 1. What is your book about and why did you write it?

The Secret Testament of Julian is Julian of Norwich telling her own story. She is famous for being the first woman to write a book in English, and for giving us the famous line of hope, ‘All shall be well’.

But the more I pondered her writings, the more I pondered the woman behind the writings and wanted to give her a life of her own. Sometimes spiritual writers, with their fine-sounding phrases, seem to float three feet above everyday life. So I wanted to put this remarkable woman right in the middle of life, knee-deep in difficulty, where the rest of us are. And if her words can live in the emotional desolation of the 14th century, then truly, they can live anywhere.

2. Julian Norwich lived in a cell for forty years. Was she confined to the cell or could she go outside? How did she spend her time?

Julian was probably confined to her cell all the time. Some anchoresses had small gardens or could go into the church adjoining their cell. But not all – and there’s no evidence this was so for Julian. In my story, I even suggest reasons why she did not want it to be so, why she wanted to be completely enclosed.

But the initial walling in of the anchoress, stone by stone, must still have been a time of terror. The bishop outside conducted a service of burial, they listened to their own funeral – for they would never now leave their cell, until they were carried out dead. (And some went mad at this containment.) As to how they spent their time, I’d imagine it varied, depending on the person. Clearly they would recite all or most of the eight daily offices of the church. People would also come to their ‘Visitors window’ for counselling. I suspect this was an important part of Julian’s life, for her writing is both keenly aware of suffering and kind to the human spirit.

And she’ll have spent a fair amount of time writing; she re-wrote her Revelations, with a shorter version becoming a longer version. And I’m sure she read. She must have been aware of others writing in English. (There’s no evidence she could read or write Latin.) Perhaps one or two of these books were smuggled in, away from the bishop’s gaze? And she may also have been a weaver, like some other anchoresses. She’d enjoy cheese or fresh Norwich herring on special days. But no TV…and no smart phones. How did she survive?

3. How did she find optimism is such conditions?

That’s a very good question, because there wasn’t much optimism around her at the time. 14th century England was particularly bleak, with repeated famines, terrible bouts of the plague (estimated to have killed well over half of her home town of Norwich) and political unrest and repression…while the church responded to people’s suffering by majoring on hell in their sermons, as did the many wall paintings in the churches, which routinely featured the flames awaiting the damned.

But somehow Julian spoke differently…there was really no similarity at all. And the evidence strongly suggests that Julian’s unique voice, completely counter-intuitive to her times, came from a set of visions given to her when she was thirty-three, and which she spent the rest of her life contemplating and growing into. It is rare in history that such a different voice emerges. Indeed, it still sounds different today, which may explain the intense interest in her work. There are Julian Groups everywhere!

The contemplative Thomas Merton believed her to be, along with Cardinal Newman, the greatest English theologian…yet she was a woman with no theological training. So how did that happen?

4. She was the first woman in the world to write a book in English. Can you say more about that?

The 14th century was the time when the English language emerged from the shadows of the French and Latin spoken by the elite. And it emerged in the brilliant minds of writers like Geoffrey Chaucer and John Langland…and, rather differently, in the minds of the anonymous author of The Cloud of Unknowing and Julian of Norwich. As she says to her vicar in my story, ‘We chatter in English, we weep in English, we scream in English, we love in English, we barter in English, we sing in English – so why do we not write in English?’

But writing in the native tongue was not encouraged by the church. They regarded it as a subversive act, making God much too common. ‘We speak of turnips in English. We can hardly use the same language for God!’ Latin, which few could understand, was thought to maintain his mystery.

And as for a woman writing in English!? As some of the friars said, ‘The devil laughs when a woman writes!’

But perhaps Julian was unimpressed by the devil and didn’t listen to him greatly.

5. Why did she pray for a near-death experience and did she ever have one?

She certainly had one, for she speaks about it in pained detail in her book, The Revelations of Divine Love. And she writes about it because it was during this trauma that she was given the visions which changed her life. Those around her assumed she was dying, she assumed she was dying and, after all, death was no stranger to their home…she had probably already lost her father, husband and child. The priest had even given her the last rites. But having lost all feeling in both her upper and lower body, and while gazing on the cross, another world opened, and over the next few hours her remarkable ‘showings’ were given to her.

She admits that as a child she prayed for a near-death experience such as this, which seems odd at first sight. Why would you?

It’s possible she was influenced in this prayer by stories from Europe where women in particular brought suffering on themselves as an act of devotion. Catherine of Sienna, in deciding to eat only the bread of the Eucharist, effectively starved herself to death.

Though I believe there may have been more particular reasons why Julian prayed for this terrible experience, and I consider these in the book.

6. And finally – was Julian great?

Greatness is an interesting thing, there are different sorts. When most people think of great women, they think of women of action – whether the child-warrior Joan of Arc, the steely Queen Elizabeth 1, the brave suffragette Emily Pankhurst, the reforming Florence Nightingale or the courageous human rights campaigner Rosa Parks. These women were out there in the world, taking bold action. I believe Julian was equally great – but great in a cell, doing nothing. She lived a life of extreme entrapment; yet knew and wrote of a freedom that still tantalises seven hundred years after her death. In an activist world, such greatness appears incomprehensible. How can you be remarkable doing nothing? How can you stay indoors… and be great? And perhaps that’s the question that led me to write my novel.

‘The Secret Testament of Julian’ is published by White Crow books.