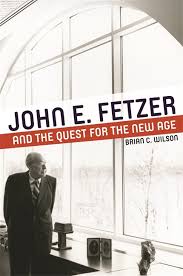 John E. Fetzer found as much joy in his quest for spiritual enrichment as he did in the wealth he acquired building a financial empire that ultimately made him the sole owner of the Detroit Tigers from 1961 to 1983 and put him on Forbes Magazine’s list of 400 richest Americans.

And that may be the most valuable lesson that he offers us today. He maintained that these two were not mutually exclusive and, in fact, his connection to a higher consciousness was integral to his success building wealth from the foundation of his radio and TV stations, to his investment in the burgeoning cable television industry and to his culminating acquisition of the Tigers.

As related in the new biography John E. Fetzer and the Quest for the New Age, author Brian C. Wilson shows how Fetzer was a forerunner of the New Age Movement, exploring multiple paths to find true “freedom of the spirit” via the insights of emerging spiritual leaders, movements and approaches – Eastern and Western – including Theosophy, Freemasonry, UFOlogy, parapsychology and Buddhism, among others.

After reading this revealing book, I believe the conclusions that Fetzer came to during his quest — and personally lived by — provide valuable guidance to anyone seeking to accelerate his or her own business growth and wealth.

Here are a few tenets that I think can be gleaned from the John E. Fetzer playbook of success:

* “Money is energy,” he often said. For Fetzer, spirituality was a recognition that all is spirit, which he conceptualized as an eternal, conscious energy that, if one were open to it, would inevitably lead one back to the “great central source.” Everything consists of this energy-even money. And if one understands this connection and taps into it psychically, then wealth and success, he believed, were within one’s grasp. This meant to him that money was to be used in the service of good, since business success and wealth could only be spiritually uplifting if used for love and service. Although immensely wealthy, Fetzer and his wife Rhea always lived very frugally, spending most of their lives in a modest home in a middle-class Kalamazoo neighborhood. For Fetzer, wealth was not for self-aggrandizement, which would have embarrassed him, but rather for the pursuit of a spiritual mission in service to the world. John’s approach was to serve first, and then money came back to him.

* Fetzer believed in Karma, and in resolving Karma in order to reach a higher order of consciousness as one passes through the many lives of one’s soul ascension. Thus, he sought to refrain from selfish, ego-driven actions that would have negative repercussions — not only in this life, but in future lives. John’s approach was to rein in his ego, seek equitable solutions for all, be generous with his workforce and partners, do his best and leave a wake of goodwill.

* Fetzer trusted a higher intelligence in guiding him to good business decisions. He meditated, contemplated and sought to gain insights that he felt came directly from source. And when he needed more guidance in plotting his business strategies, he used pendulums, astrology, Tarot cards, and even the Ouija Board. Or, he would turn to trusted mediums, psychic advisors, dowsers and channelers. He found multiple ways to tap into the infinite intelligence. And he could point to specific situations which paid off handsomely. John trusted the Universe to provide answers, listened to his intuition, and tapped multiple sources for his answers.

* Fetzer was still seeking to learn, grow and unravel more of the Universe’s mysteries, even as he approached his 9th decade. He never stopped trying to raise his consciousness. And in order to bring others along to a more advanced state of consciousness, so that they, too, could experience the love, compassion, and spiritual connection that creates abundance and peace, he funded some of the seminal spiritual/paranormal/scientific research of the 70s and 80s, to validate the existence of a higher power that can change our lives vibrationally. John never stopped questing, because it kept him vital–engaged in life and business.

* Fetzer was a believer in “oneness,” that we are all one unified force with the source of creation. So he lived by the “Golden Rule,” because he knew that he was connected to each and every one he encountered. He dealt with people with a fair and even hand. He brought respect to the negotiating table. He was beloved by his players on the Tigers and the employees in his company. John sought the good in all, refrained from gossip or unkind words, treated his employees with love and regard, dealt in good faith and was a positive light wherever he went.

* For Fetzer, leaving a legacy for the world was paramount. In the 1980s, when Fetzer was beginning to wind down his business activities and sell off his holdings, including the Detroit Tigers, he used his fortune to endow the organizations that would carry his mission forward, to improve “the human and cosmic condition” through the advancement of the spiritualized science that he felt was so necessary for global transformation, and to support the programs that facilitate building a spiritual foundation for a more inclusive, loving, peaceful world. The lesson here is to weigh what legacy you can leave for the world – and while it may not be funded by great wealth – it can be the fruits of your time, efforts and gifts from which others can enjoy and prosper in the future.

For those who are seeking validation that business success and enlightenment can actually work hand-in-hand, Fetzer’s extraordinary life stands as evidence.

Brian C. Wilson, PhD, is the author of John E. Fetzer and the Quest for the New Age. He is a professor of American religious history in the Department of Comparative Religion at Western Michigan University. To download a FREE CHAPTER of his book and learn more about how John E. Fetzer explored the interconnectedness between science
and spirituality, visit www.infinitepotential.com