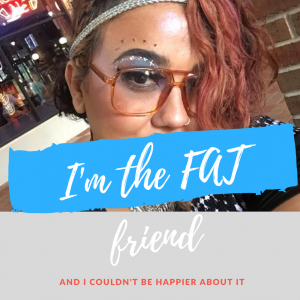 It dawned on me last week, during a late night dancing session at the local goth club. I arrived with two friends, not too different from me.

All three of us are close in age — in our mid to late 30s, approaching early 40s — no longer youthful like the college kids dancing around us, but with an easy-going confidence that comes with age.

The big difference between me and my friends is our outward appearance. They are blond, I am a natural brunette with strawberry-dyed curls. They are thin, and I’m…well, fat.

When you look at me you can’t help but notice the extra weight that I carry around my face and midsection. I’m wide, and round and most women’s brands don’t carry my size.

Society tells me I’m fat. When I go out with my friends, they get a warmer reception than I do.

I take up more space on the dance floor. I see people staring at my back fat in my swimsuit at the beach. And take notice of men who talk to my friends in the club without acknowledging I, too, am standing right there.

Sometimes, for all this mass, I may as well be wallpaper.

But here’s the thing, I don’t care.

My Life as a Skinny Person

I was a skinny person once. Very skinny.

In my teenage and young adult youth, I struggled with untreated ADHD, insomnia and other problems. I would go days without really stopping to recharge my battery. Sometimes that meant, going three days in a row where all I ate was a bowl of rice each day.

It’s not that my mom didn’t cook, she usually did. But with a busy family on different schedules and some alcohol problems in the mix, it was easy for me to hide the fact that I wasn’t eating. No one was really taking inventory.

Other days my friends and I would make bad decisions and come back to my house to binge on snacks.

At the time, I didn’t realize that I was suffering from an eating disorder. I restricted my eating, I binged — sometimes to the point of purging — I lost a lot of weight.

I remember having to do a food diary as a general curriculum assignment for health class. After three days of reporting 500 calories a day (mostly in cookies at lunchtime) my instructor pulled me aside to ask if I was ok.

I felt like I was ok. I was thin and pretty, so my life was pretty easy.

I had become a comfortable level of popular, where I had a big group of good friends — but didn’t hang with usual suspects in the popular crowd. I immersed myself in friendships with drama and art kids, and band nerds.

I never got into a situation that being young and cute couldn’t get me out of. The phenomena of skinny privilege is absolutely a thing!

And for all of that, my quality of life was not good. I did bad things solely to make myself feel better and to hide the fact that I had no idea who I was, deep down. I constantly questioned my own worth. My grades dropped. I got myself into situations, I hope to never repeat.

And it only got worse as I got older.

The Day I Gained

Okay, so it wasn’t a day. It’s been years that I’ve been gaining and losing to the tune of 120 pounds over 17 years. But in the beginning, the first year or two, every big spurt of weight gain felt like it happened over night. It felt like my daily defeat.

At 135 pounds, I kept thinking about when I weighed 111 and wondering where this weight came from. The same at 150 pounds, then 180 pounds.

I realized that over the course of about a year, I had gained about 80 pounds. Adulthood for me, meant being a young twenty something, trying to learn to adjust major changes in my own body.

At first, I was miserable.

Up until I was about 21, I had been dating my highschool sweetheart. But he and I broke up.

I was dating men for the first time in my life in this body didn’t feel like my own. It was a trying time, being both naive due to a sheer lack of dating experience, and vulnerable because I couldn’t understand my own worth.

The funny thing is, for what it’s worth, being overweight didn’t affect my sex life. I was my own worst critic, and didn’t make the best dating decisions as a result.

In my twenties, I drank… a lot. I was a server at a bar and grill, and felt really at home in the culture of waiting tables. Drinking after work, was just the thing to do. No one had anything to do in the morning, and so we stayed up until sunrise.

I can’t say it wasn’t fun, but it still hadn’t clicked for me. I hadn’t found what I was looking for — a good relationship with myself.

Like many existential twenty-somethings, I tried to fill the void with partying and good times. But it didn’t work.

The Ups and Downs

No one tells you that kind of lifestyle can only last so long. And as someone who has a tendency to overindulge and gain weight quickly, that life wasn’t getting me any closer to the skinny girl who I still believed lived inside my fatter body.

But as weeks turned to years turned to decades, it became more and more obvious that she… was gone.

For a long while, I mourned the skinny person who I thought had abandoned me. The one who felt like the best version of myself.

My lack of skinny privilege became the most apparent within my career.

As a young person, I had become accustomed to getting what I wanted. At one time, I felt like I must’ve been a really great job interviewee because every time I interviewed for a job I got an offer.

Bright, charming, pretty — right out of college I was going to take the business world by storm.

I’ve always been a go getter and goal setter, I had my eye on education administration and marketing jobs where my future as a junior executive would be realized within a few years.

But instead, I continued to gain weight, and lose career momentum.

I faked a smile as the male executives at the firm I worked for made sexist jokes about other fat women right in front of me. I worked overtime, lent my talent and ideas, and was still sometimes resented by my male counterparts.

I watched other women rise through the ranks, while talks of eliminating my position started to permeate in the white noise. After I announced that I was pregnant, I was eventually asked to resign.

I later caught up with one of the females who had done well at this company and she regaled me of stories of sexual harassment at the hand of another executive. I wasn’t surprised.

Over the next three years, I would be laid off from three positions — two of which let me go during the same pregnancy. I was told I was bossy, abrasive — feedback I had never received as a skinny person.

When I took personality tests for the various sales jobs I was in, my results came back with traits like “assertiveness”, “ambitious”,  “a strategist” and “someone who can use multiple solutions to solve a problem.”

But instead of rising through the ranks, powered by my own ambition, I was told to be more delicate in my email communications and I started using more emojis. I often was offered lateral moves and my career seemed to stall.

The Journey to Wellness

That was the year I got laid off from the last of three jobs. Up until that moment, I had begun employing mindfulness strategies that helped me achieve a better diet and overall reduction in  ADHD symptoms.

The golden ticket for me is practicing mindfulness techniques and eating low carb.

I was surprised to find that, for me, a low carb lifestyle helped to get off of ADHD medication that I started taking as an adult. The idea that your diet can control ADHD is by no means a medical opinion or recommendation, it’s just something that worked for me. Always consult a doctor before stopping medical intervention.

My main goal was to feel like I could understand what my body was telling me, which is why this is more of a mindfulness story than a weight loss one.

I had come to the realization that I was a floating head. Everything I felt and experienced was from my mind, but I wasn’t reading sensations from my body. There was this big, obvious disconnect.

It felt like my body had gone dark, and my mind was behind the wheel. In an attempt to reconnect, I began seeing a holistic therapist, practicing mindfulness and came to the conclusion that I needed to eliminate most carbs from my diet.

I did briefly hop onto the ketogenic diet fad train, but ultimately decided the best diet for my ADHD management was some mix between keto and paleo. Over that year, I lost 50 pounds.

And then I lost my job in a company-wide downsizing. My diet changed again, for the worst. I gained weight that I’m still trying to lose. But more to my detriment, I triggered my ADHD and derailed my wellness journey. I’m still working on getting back on track.

I know the answer for me is being mindful. That means being thoughtful about all decisions including food and drink, but it’s also so much more than that. It’s connecting my brain to my body, and tapping into the awesome person that I am.

Over the course of a life that has lead me from skinny to fat, to mindful, to falling back on old ways, I learned something important:

I am better because I am fat.

There. I said it.

This certainly isn’t true for everyone. There are plenty of skinny, self aware people walking around the planet earth. But I was not one of them.

When I was thin, I was unhappy with myself. Gaining weight, I was challenged to learn how to love my body in a way that I never could before.

I appreciate what my body has done for me: the birth of my child, the vessel that gets out of bed each day because I tell it to, the hands that tapped out this blog.

But along the journey to finding my best self, I had to learn to overcome prejudice. And, when I turned that corner, what I found is that some people resent my happiness because I’m fat.

The thing is, that’s their problem — not mine.

They resent me because they fear what I am. They fear being fat or otherwise losing their youthfulness. But at 35 years old, I know youthfulness doesn’t stick around forever and being confident means appreciating yourself at every stage, be it thin 18, fat 35 or frail 90.

No one can take that away from me. So what if they stare when I dominate the dance floor? Let them stare, maybe they’ll learn something.

I’m the “fat friend” and I’ve never been happier.

Susan is a writer, contributor and content marketer who publishes her own blog, Marketing and Murder <http://www.marketingandmurder.com>. Susan’s greatest successes include a fruitful 10+ year career in marketing and outside sales, as well as a master’s degree in human services, marriage and family therapy. But her happiest role is just being Mom to her young daughter. This piece discusses the obesity, confidence and self-love.