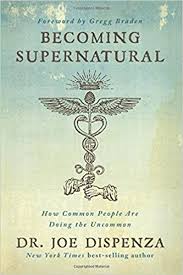 The term “supernatural” is often applied to anything society labels as “beyond the real.”

It may involve magic or the uncanny. It may refer to capabilities or beliefs that do not seem very human.

In Joe Dispenza’s perspective, the supernatural is actually the natural. It applies to everyone and everything—if only we believe it.

Dispenza’s latest book, Becoming Supernatural: How Common People Are Doing the Uncommon incorporates many of the principles readers can find in his former works. The idea that we can control our own biological and spiritual healing, central to his famous You Are the Placebo, appears again in Becoming Supernatural, but with new force.

Dispenza is a scientist and lecturer, “driven by the conviction that each of us has the potential for greatness and unlimited abilities.” His niche lies in his explorations of the science behind spiritual acts, endeavors, and beliefs.

In the past, he’s partnered with other scientists and institutes like The HeartMath Institute to research the science behind the effects of meditation, visualization, and patients’ ability to heal themselves.

Becoming Supernatural is no less ambitious, written in Dispenza’s big-hearted, amiable prose. Its difference from previous works lies in its emphasis on quantum physics and our capacity to access the quantum field, what Dispenza calls the “field of unlimited possibilities,” via meditations and heart coherence.

In fact, this book feels like the apex of a lot of Dispenza’s intriguing ideas. It is more urgent than his other pieces, as if it knows all too well how easy it is to doubt ourselves and not believe in our own biological potential.

It is also unabashed in its presentation of the science behind all of these supernatural acts, loading the reader up with glossy charts, graphs, principles, and case studies. While it would have been nice to hear what type of criticism Dispenza has received from the scientific community—which he mentions only fleetingly in the Forward—the brain scans and meticulous evidence are hard to ignore.

Becoming Supernatural snatches the reader by the heart in the first pages, detailing a case study of a woman whose husband committed suicide unexpectedly. The study outlines the severe deterioration of her health and, ultimately, her ability to reverse cancer, infections, and more through meditations and investment in her future.

Dispenza then brings in a personal anecdote to fully flesh out his belief in an eternal present in which we have the capacity to build a relationship to our past or to our future. This is the heart of Becoming Supernatural: that most of us are in love with our pasts and living in disbelief of our futures. As such, we succumb to illness, old patterns, and “natural” futures.

Dispenza argues that being in love with your future, on the other hand, broadcasts an electrical signature that the quantum field registers and responds to. Thus, much like the law of attraction, living as if you will become a wealthy individual is more likely to draw that experience to you. Living in old habits and belief systems will, similarly, attract those types of experiences and beliefs to you, perpetuating the cycle of the past.

By analyzing the chemistry of emotions, beliefs, and visualizations, Dispenza persuades readers that it is possible to train your body to live its future, whatever you want that future to be. This is accomplished through meditations that carry one’s consciousness into the quantum field, channeling high-frequency emotions like gratitude, love, and compassion, and embodying the desired future experience.

Becoming Supernatural also discusses breathing techniques and meditations designed to move cerebral fluid up the spine and activate the pineal gland, all key components in modifying and healing one’s biology. An additional meditation involves blessing the chakras or energy centers in the body to promote alignment, while other exercises involve creating “mind-movies,” a visual panorama similar to a vision board.

In essence, these tasks enable your body to remember the future rather than recall the past.

The book’s case studies focus on individuals who have healed themselves of devastating illnesses and physical conditions as a result of this work.

However, the goal of all of these meditations and work does not have to be biological. Dispenza urges readers to manifest their futures based off of their current needs. He cites stories of people manifesting all-expenses-paid vacations, fulfilling relationships, new jobs, and mystical experiences in addition to biological change.

It is hard not to be swept up in the magic and limitlessness of Dispenza’s words, particularly toward the end of Becoming Supernatural, where he writes about the global application of living in a heart-centered world. This type of work, Dispenza claims, can knit communities together, dissolve crime, and reduce terrorism. What’s more, anyone can do it, provided they are focused and connected to the field of all possibilities.

(Then again, the book suggests that you are more likely to accomplish all this by attending one of his advanced workshops, but that is beside the point.)

This is perhaps the sticking point of Dispenza’s book. He emphasizes the need to work at these meditations, actively, until our futures blossom under our fingers. One has the sense that we can manifest our future in such a way only through rigor and supernatural dedication.

(I personally am of the belief that a loving and abundant universe does not require us to have Protestant work ethics.)

Becoming Supernatural can also become a bit redundant, as Dispenza reiterates certain ideas too frequently. While the beginning enables readers to step into his own engagement with his future and the quantum field, his personal anecdotes disappear by the end.

Nonetheless, these are perhaps picky stipulations for an altogether hopeful, straightforward text that reaffirms our ability to tap into our own divinity. It is highly accessible and actionable, incorporating a detailed meditation at the end of every chapter. In this sense, Becoming Supernatural is every spiritual wanderer’s essential tool to understanding their own potential and truly creating their own futures.

Even if readers don’t apply Dispenza’s regime and rigor to their meditations, Becoming Supernatural is a solid, articulate reminder that we can be the agents of all that lies before us, and that we don’t have to be slaves to our past. With science to back it all up, it’s impossible not to feel limitless and, well, supernatural.

Kate McGunagle is a freelance writer, editor, and mindfulness blogger. Her blog (A Lighter Earth) focuses on conscious living, spirituality, and sustainability. A graduate of Princeton University and Boston University, she recently moved to the northwest of the U.S. to become a yoga instructor, launch her writing career, and build an off-grid tiny house in the mountains.