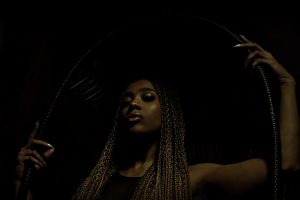 By LaTasha “Tacha B.” Braxton

One day I woke up, and didn’t want to drown my pain in a bottle of liquor anymore. I hated who I was, and cried hysterically at the person who stared back at me in the mirror. Drinking to escape my hell on earth was damaging me even more, adding onto the trauma I was already experiencing. The day I decided to put down the bottle for good, was the day I finally heard God speak to me. It was as if he’d been trying to communicate with me for so long, but being impaired by all the alcohol muted his voice and guidance. That day I was able to hear, That day I was gifted with all of the solutions needed to escape my dreaded life in order to make a new.

And along with these epiphanies, came a task. This powerful voice that was impossible to ignore, told me to use my pain, my trauma, my shortcomings and my experience of survival to write a book that will help others survive as well. And I listened. I wrote that book, and titled it “Dark Chains”. Throughout the writing process I felt as if I was on a journey backpacking through the wilderness. Just me, scared and alone in a drifty forest, surrounded by fog, darkness and uncertainty. Walking through natural elements that inflict excruciating pain, growing more exhausted with each passing day. With only the thoughts of an exit and civilization to keep me alive and going.

And despite the many panic attacks and emotional breakdowns I endured during this journey. When it was all over, my pain unveiled itself as my purpose. While my journey became something that made my heart and mind an auspicious duo instead of old rivalries. I ended up confronting the pain my abusive mother left imprinted in every fiber of who I thought I was. I was able to eliminate the misconceptions I had formed deep in my mind from years of dysfunction, neglect and lack of love. The little girl inside of me who’s emotions I’ve been smothering for decades as a means of survival needed to be acknowledged, and her resilience and bravery praised.

As this powerful voice continued to guide my writing, I became more and more selfless and aware with each passing day. In my eyes and in my heart, Dark Chains was my piece of contribution to society. A book to help young girls and boys who grew up in conditions similar to mine. A book to heal the hurt and abused, and turn victims into the powerful self loving souls they were always meant to be. I wanted to write a book that could help mend families and prevent dysfunction and generational chains from forming within bloodlines. 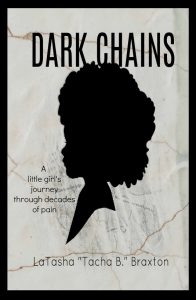 But what I didn’t expect, was how my piece of contribution to the world, would also end up being the missing “peace” to my own puzzle. After writing this book, I felt as though I was floating within my own oasis, amidst a violent Caribbean thunderstorm, but protected from harm by a forcefield of my own bright light and spiritual growth. The abusers who haunted my life of course continued with their efforts to destroy my happiness, reputation and sanity. And as my autistic son grows older, his behavioral problems continued to intensify. The chaos/storm was still ongoing. But something changed within me. Instead of allowing these harsh conditions to disrupt my peace, break down my mind and weaken my forcefield. I allowed for my newly found perspectives to be the energy source my forcefield needed to grow bigger and much more powerful. And within this newly charged oasis, fully protected from chaos.

I began asking myself questions.
Like, “Why was my life so hard?”
“What did I ever do to deserve such pain, such abuse, and such neglect?”
And, “How could I survive so much, and still be alive and sane to even function?”
“Why am I still alive, and what is it that I’m suppose to do?”

I’ve been through things that should have killed me, I’ve been through things that should have destroyed my mind, my body and my faith. I remember a time when those kind of questions would never dare show up and linger in my mind for me to face. But now, after releasing those fragile and chained up emotions. Now after finally listening to God. I was getting the answers I needed to grow and fulfill my duty. And for the first time, I’ve been given a chance to finally live a healthy life. My answer was clear. I needed the pain, I needed the struggle and the heartbreak, I needed to be neglected, beaten and abused in order to help others find their way. My pain made me relatable to the abused and the mistreated. My traumas gave me the insight and the strategies to be able to coach people through the darkness. And being neglected and manipulated made me resilient and aware. I became a fighter, and I became good at it. And now, I want to help put that fight, into you.