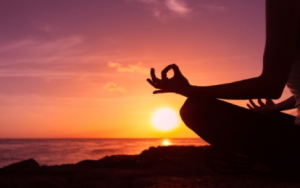 In the modern world, people are struggling with ill mental health in ways nobody has seen before. Though there are many factors that contribute to this, lots of the root causes remain relatively unknown. Despite such a rise, it has also meant that people have been coming forward with new ways in which to improve their mental health and help those struggling aroundthem. You will be aware of how eating a balanced diet, exercising regularly, and sleeping enough can help tackle such problems, but there are some emerging tips you can try if you want to start feeling like your usual self again.

The benefits of exercise are unparalleled in how they can help people improve their mood, due to the chemicals your brain releases that invoke feelings of content. Yet, people have picked out one exercise to calm anxieties and treat depressive symptoms: yoga. In fact, many scientists have found that regular practice has been shown to decrease stress in lots of people. This is because of the meditative aspect to it, which combines with the exercise component to induce a sense of relaxation.

It is easy when you feel down to disconnect from the world around you. This means you could feel as though your exercise routine is less appealing than usual. Although you should try and stick to it, there will be days when you can’t, but that doesn’t mean all hope is lost. In fact, keeping your brain active can release a similar amount of endorphins to exercise, which are essential chemicals in securing a happy mind. You can either play mind teasers from your handheld deviceor step outside and try the Escape Room Columbus to truly stimulate your brain.

Some researchers have found the link between the rise of social media and mental health problems such as Anxiety, Anorexia, and Body Dysmorphia. This is particularly true for younger generations, many of whom have not seen a world without social media. In times like this, it is often best to switch off from the virtual world; as a parent of a young person, you can encourage days away from handheld devices where you can step outside into nature and reconnect with the natural world. Switching off is much easier said than done, so try building up to it by hiding your phone away for a few hours each day.

Forthousands of years, people have been reaping the benefits of spas, where steam and massages can help your body and mind relax. Yet, spending time in spas can be expensive, and not everybody can afford it. This doesn’t mean people should miss out on the benefits it can bring to their mental health, so you can take steps to invoke a spa in your own home. Splurging on scented candles, fluffy towels and aromatherapy body oils can revamp your bathroom, and your bedroom can encapsulate relaxation by having soft furnishings and welcoming lighting.