In his bestselling Ten Poems series, author Roger Housden has shown an uncanny ability to choose and discuss poems that strike at the core of readers’ concerns and needs. In this new volume, ten extraordinary poems, along with Roger Housden’s incisive essays, bring heartfelt insight and broad perspective both to our personal challenges and to our cultural and collective malaise. We hope you’ll enjoy this Q and A with Roger about the book.

Your popular Ten Poems series began in 2001 when Ten Poems to Change Your Life was published and the last book, until now, was Ten Poems to Say Goodbye in 2012. What inspired you to add another book to the collection?

Trump’s election victory inspired this latest in the 10 Poems series. Like half the country, on the day after the election, I was wondering how I might respond personally to what seemed to me to be a dangerous turn in the American political landscape. I was out walking the next day when a book title came fully formed in my mind — Ten Poems for Difficult Times! I hadn’t been thinking of writing a book at all, but suddenly there it was.

You say that poetry is profoundly necessary especially in times of both personal and collective darkness and difficulty and that reading or writing is one thing we can do to make a difference.  Please tell us more about how poetry can make a difference

Great poetry can alter the way we see ourselves and the world, and in that sense it is subversive. It challenges the status quo. Poetry and literature in general have been routinely banned around the world at various times because of their subversive influence. If poetry is a humanizing influence, it works directly against those ideologies and attitudes that restrict rather than encourage liberty and justice. Poetry encourages empathy, a feeling of kindredness with others, and that makes it more difficult to support the forces of oppression. Has poetry or literature ever stopped a war? No. And yet the poet Osip Mandelstam while in one of Stalin’s death camps, restored the soul to his fellow prisoners by reciting poetry to them. “Perhaps to remain a poet in those circumstances,” said Saul Bellow, “is also to reach the heart of politics. The human feelings, human experiences, the human form and face, recover their proper place – the foreground.”

You say that poetry revitalizes our imagination and that imagination today is under siege today. How so?

Imagination draws its greatest sustenance from the natural world and the everyday objects within our daily lives. The proliferation of the web and technology has caused many of us to live in a virtual world more than in the real one, cutting us off from imagination’s food.

You say that,  “We ourselves can wake up to the world and to ourselves in a new way by reading poems like the ones in Ten Poems for Difficult Times, and that this is especially true when we read them aloud.” What changes when we read poetry outloud?

Try reading a poem aloud and see how different it feels compared to simply reading it on the page. The human voice brings the poem alive, embodies it, and adds an extra dimension. Traditionally, poetry was always recited aloud, not read. This also makes it a communal activity rather than a private one.

I appreciated how you wove the power of music and song into the book through some of the poems you selected. Tell us about the relationship between music and poetry. 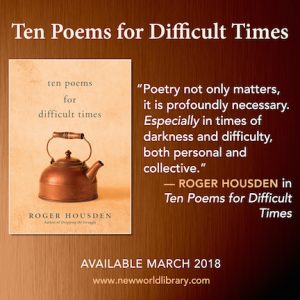 Poetry was traditionally always spoken and often accompanied by music. Orpheus, the first poet, was also a musician. For me the most musical poem in this book is Rain Light by W.S. Merwin. The words flow on a river of rhythm from beginning to end. Conrad Aiken’s The Quarrel refers directly to music all the way through, although its theme is a lover’s quarrel.

What do you most hope people will take away from your book Ten Poems for Difficult Times?

I hope that readers will feel a quietness of heart that is not the result of hiding from the world’s sorrow but the result of fully acknowledging it and knowing that it is an inevitable thread in the cloth of our life.

Roger Housden is the author of the new book Ten Poems for Difficult Times, the most recent addition to his best-selling Ten Poems series, which began in 2001 with Ten Poems to Change Your Life. He offers writing workshops, both live and online, with an emphasis on self-discovery and exploration. Visit him online at www.RogerHousden.com.