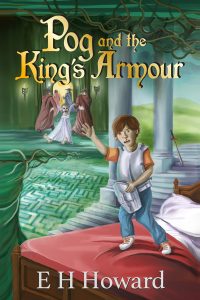 I have been asked to discuss one of the spiritual concepts I have hidden within, ‘Pog and the King’s Armour,’ and have chosen, ‘The Maze of Albor.’

I’ve yet to meet a writer who isn’t also a reader. Knowing the pleasure of being lost in words encourages a writer to try the art. I grew up loving CS Lewis, JRR Tolkien and other fantasy authors. Lewis’s Narnia books are the inspiration for my children’s book ‘Pog and the King’s Armour.’ And if Narnia was a childhood favourite, Lewis’s Screwtape Letters is certainly an adult one.

In my struggle to find spirituality that worked for me I looked at many paths. I came across a website where Rabbi Arnold Jacob Wolf explained Jewish spirituality as: walking along a street that’s studded with precious stones, and the goal is to gather as many stones as you can or a few of them that are beautiful. The street is three thousand years old, so there are many precious gems in it. Some of the jewels are easily dislodged from the pavement, so you can easily put them into your life, but others will remain stuck in the pavement. Some are so obviously beautiful that you can understand them just by looking at them. Some of them are very obscure and hard to appreciate.
In ‘Pog and the King’s Armour,’ the Maze of Albor is the street. In it, the heroes search for the scattered parts of a suit of armour amongst the distractions of other treasures and artifacts. (The armour represents faith, but that’s a whole other article!)

I needed to stretch the concept a little. Because some pretty bad ideas can seem appealing, I decided to sprinkle rubbish as well as treasures and armour. In life, both good and bad experiences guide us. In the story, Pog uses the rubbish to help indicate the paths he has already tried.

Within the maze we meet an antagonist, Benjamin. I love the Screwtape letters and, if I believe in a Higher Power, surely I also accept the existence of a Lower Power? My experience has been after every decision to follow a spiritual path, there is always a distraction away from it. Work piles, up, personal crises hit. Or, much more subtle, things suddenly seem to improve. Things get so good, I don’t need to make the changes I planned; why fix what isn’t broken? For a Christian, Jew, or a Muslim, Benjamin might be Satan. For the Gaia-oriented he might be the cosmic balance.

What am I offering that is spiritual?

Many people write about their own perception of a spiritual path. In doing so, they run the risk of suggesting other ways are wrong. I am not attempting this. Not wishing to belittle anybody’s chosen faith, but having considered many spiritual paths, I reached the conclusion that most of them contain common principles. It is also true that parents and guardians of different backgrounds wrestle with the same problem of engaging their children with faith; it is the nature of the young to not hear their elders.

I believe I have concealed within ‘Pog’ examples that can be used to introduce ideas of spirituality without appearing overbearing. A child who has accompanied Pog within the maze is able to understand how frustrating it can be to be aiming for a goal, but be turned around by the path. Or the feeling of struggling to reach something only to find the discovered treasure is worthless.

The idea of parables and fables isn’t new. But I believe providing a set of building blocks to construct new ones is. There is no right way to interpret Pog. It is first and foremost a children’s story, but it is also intended as a toolkit of metaphors for years to come. Please read it out loud, and once through the maze, take the time to discuss the importance of decisions. Every turn on the path has a consequence and not all guides have your best interest at heart.