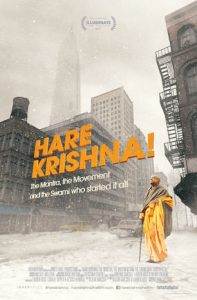 Hare Krishna! The film is now screening. According to the film’s synopsis:

1965: America is in turmoil. Unprecedented introspection and questioning of societal norms roil the country. Prabhupada, an unassuming 70-year-old Swami from India, arrives in New York City alone and without support or money. He carries only the ancient scriptures he has translated, and the firm faith in his teacher’s request: “offer spiritual wisdom to the people of the world!”

Suddenly thrust into the raging counterculture movement, Prabhupada speaks of the world’s real need, which is not necessarily satisfied by political or social revolutions, but by a revolution of consciousness. This divergence from the status quo successfully captures the attention of a generation of youth seeking answers to life’s existential questions. From a tiny storefront on 26th 2nd Avenue, Prabhupada shares with them the idea that the way to find real happiness, love and freedom is to search within and connect to your true self. All this, the Swami says, begins by simply chanting a rhythmic, meditative 16-word mantra – Hare Krishna, Hare Krishna, Krishna Krishna, Hare Hare, Hare Rama, Hare Rama, Rama Rama, Hare Hare.

This universal message resonates with more and more people, including musician George Harrison whose hit song ‘My Sweet Lord’, features the Hare Krishna chant. From there, Prabhupada’s movement explodes, and his followers – now known as the Hare Krishnas – become infamous for chanting and dancing in the streets.

Not everyone is enamored by the enthusiastic, and at times overzealous, fervor of Prabhupada’s young followers. As more people join the movement, parents and community leaders begin to view it as a dangerous cult. Devotees are charged with brainwashing and are taken to court in a controversial case that threatens to undermine everything that Prabhupada has worked for…

Hare Krishna! is the true story of an unexpected, prolific, and controversial revolutionary. Using never-before-seen archival verite, Prabhupada’s own recorded words, and interviews with his early followers, the film takes the audience behind-the-scenes of a cultural movement born in the artistic and intellectual scene of New York’s Bowery, the hippie mecca of Haight Ashbury, and the Beatle mania of London, to meet the Swami who started it all.

For more information about the film and to find screenings, you can visit http://harekrishnathefilm.com/