Excerpt from Choices and Illusions by Eldon Taylor

Change is perhaps the most sought-after goal in life. If we but had more money, more education, and less compulsion, could lose weight or stop smoking, be more popular and have more friends, and so forth, life would be perfect. Change is also perhaps the most frightening experience we can undertake. Change means giving up something, some belief, some habit, some pattern, some something. Change from the inside out can also mean great risk.

Genuine change often means letting go of acquaintances who hold different beliefs—like our bad-luck fortune-cookie carriers. It isn’t so much that we let go of them as they abandon us, for we no longer provide a sanctuary safe for “cookie” sharing. There are also plenty of naysayers. Like the smart chickens in the chicken house, they will tell you all this is nonsense. Some may even attack you with such words as hoax and fraud. Like most attacks, they are designed to produce feeling of insecurity, doubt, even stupidity. One book out there suggests that self-help efforts generally rob people of their money and their esteem. The book is entitled Sham: How the Self-Help Movement Made America Helpless, by Steve Selerno. I heard him tell of a sales event he attended with salesmen all from the same company. He criticized the motivational speaker on the grounds that in the beginning of the presentation the speaker told everyone in the audience that each could be the number one salesperson in the coming year. Such was a logical absurdity, he asserted, for how could they all be number one in the same company? Stop and think about it for a minute. Do you really think either the salespeople or the motivator took this statement to mean anything other than each of the salespeople in the room had the ability to be number one? I don’t. Indeed, I have been guilty of far worse, at least on the surface, by stating that we can win at everything!

Now you might say, “How is it possible to win at everything?” The answer is simple, but it is also involved in the definitions attached to winning and losing. Let me get this point straight, right from the beginning. We only lose when we let ourselves down! We can only win, in the real sense of winning, when we do our very best! Our very best requires commitment, courage, dedication, singleness of purpose or focus, and more. These attributes are fundamentally known as character.

A friend of mine, Coach Phil Porter, says, “The basis of winning is character.” Phil is an ninth dan black belt in martial arts, a retired Air Force major, and the coach of many Olympic players. He adds, “Character is simply a combination of all the virtues which have been the basis of American life.”

Character is a hallmark of great champions. Character is developed. Character requires an earnest effort to be, to live, to think, and to act according to a code of conduct that dictates honesty and integrity in all things. No higher act of honesty exists than that which is necessary in order to stand back and say, “I know I did my very best!” Self-honesty can be one of the most difficult characteristics, and yet the most rewarding, a person can ever develop. The words of Pythagoras ring as true today as ever: “Above all else, know thyself!”

Words and truisms can be interesting. When I was very young, the words “all men are created equal” disturbed me. What on earth did this really mean? It was obvious to any child that all men were not indeed created equal. Adults who truly wished to settle my concern over this foolish matter gave me many answers. Their typical answer went something like “in the eyes of God, all men are equal.”

Although this answer did provide some comfort, it nevertheless failed to register at every level of my being as “true.” Then one day the answer was put to me another way. It went something like this: Imagine a rocket scientist who after much work launches an interstellar voyager. Imagine the pride he feels in the accomplishment. Now imagine a so-called menial laborer. On his hands and knees for endless hours, he scrubs and polishes a floor. He has worked so hard and with so much pride that he has scrubbed his knuckles raw. Now he stands back and beholds his labors. The floor absolutely glistens—every square inch of it. It never looked this good even when it was new. Now, I was further instructed, which man senses the most pride, the rocket scientist or the floor scrubber? 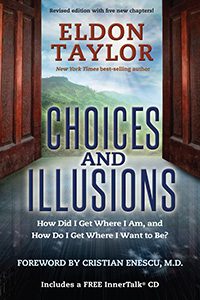 Eldon Taylor has made a lifelong study of the human mind and has earned doctoral degrees in psychology and metaphysics. He is president of Progressive Awareness Research, an organization dedicated to researching techniques for accessing the immense powers of the mind. For more than 20 years, he has approached personal empowerment from the cornerstone perspective of forgiveness, gratitude, service and respect for all life. To contact Eldon in response to the story, you can reach him via his website: www.innertalk.com. To get a copy of his new book Choices and Illusions, go to: