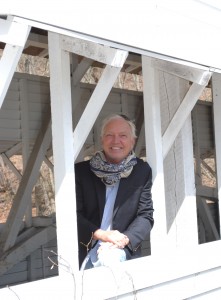 Below is a Q&A with Bud Megargee.

TELL ME A LITTLE BIT ABOUT WHO YOU ARE AND WHERE YOU LIVE?

I was one of four siblings from a blue collar family who grew up in a deteriorating steel town in Southeastern Pennsylvania.  After High School I attended Midwestern College in Denison, Iowa and later on received my advance degrees in healthcare and psycho-educational process from Temple University in Philadelphia.  I continued my professional analytical training, with a focus on Humanistic Psychology and Structural Family Therapy, well into the early 1970’s and in doing so honed my analytical skills. Slowly, however, I found myself immersed in the for-profit world of mental health, initially as a practicing clinician, later as a senior executive and finally as a Washington DC healthcare lobbyist.  In spite of the formality and conservative nature of my professional lifestyle, privately I continued to be drawn to the unconventional theories of alternative medicine and Eastern Philosophy.

I was continually searching for an acceptable avenue to incorporate mindful teachings into the healing process of the mental health profession.  As an example: while living in the Washington DC, I studied at a Taiwanese Monastery in Northern Virginia invoking Vispassana meditation in an effort to bring clarity and skill to both my professional and personal issues through meditation and simple awareness.  It was at the Wat Yarnna Rangsee where I met an elder monk who, during our debates, dispelled my skeptical beliefs by indicating to me that in my personal and professional life there were teachers available; some of these individuals had gifts that could not be explained; and, if those gifts were needed, perhaps I would find them…or they would find me.  It was at this point I started my journey which has resulted in “Dirt, TRUTH, Music and Bungee Cords”.

ARE THERE ANY FAVORITE LOCAL SPOTS YOU LIKE TO VISIT, ONES THAT INSPIRE YOUR CREATIVITY?

Although it may not be the most glamorous setting there is a beautifully manicured bike and running park in Trexlertown, Pennsylvania, where I have spent many early evenings and weekends.  I found Bob Rodale Fitness Park, while consulting for a Hospital in the Pennsylvania Lehigh Valley area and I would take my daily run to convince my legs that they had one more marathon in them.  It was during those times that I began connecting with the Oracle in rural Northeast Pennsylvania who appears in the book.  With each experience undertaken, the Fitness Park took on an intimate, meditative and sometimes ethereal role for me.  A thousand tress, grasses and walking paths within the boundaries of the park allowed me to pause and hide without human contact for hours.  During those private introspective and self-observational moments, I was able to sort through the transformational encounters I was experiencing with the Oracle, monks and guides.

WHY DID YOU WRITE THIS BOOK?

Jokingly, I tell my close friends that I was strong-armed by my guides into publishing “Dirt, TRUTH, Music and Bungee Cords – Conversation with the souls who guide my life.  Honestly, as my six year expedition into the irregular world of monks and guides progressed, it became increasingly clear that I was meant to find a way to document my experiences. “Dirt,” as my Editor states, can be simply viewed as the dictating of events where I confront a wise, yet reluctant Oracle, a group of Taiwanese monks and eventually my personal soul guides – not unlike the author Carlos Castaneda did with his warrior sorcerer, Don Juan.  I found writing factually of my experiences proved to be a learning portal straight toward the truth of my own existence. As I encountered those who knew me better than I know myself there was no safe withdrawal.  The dialogues described in, “Dirt,” exemplified the risk that I took; and, in doing so, how I innocently constructed a cloak around the person I was intended to be.  In short, I wrote this book for myself.  I wanted to memorialize how I bridged the border of uncertainty into a region of genuineness where I could see myself for who I truly became.  There are many paths to find answers, this was mine. 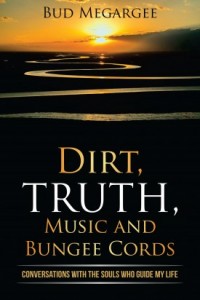 COMING UP WITH A TITLE CAN BE DIFFICULT.  TELL ME HOW YOU CAME UP WITH YOURS?

Before I started writing, I recall reading an article by an unnamed New York literary agent who emphasized that she increasingly received more query letters from authors seeking her to represent their projects.  Her article suggested that whimsical titles caught her eye and were always placed in the “to read pile.”  When it came time to title my six year adventure, I was torn between manipulating the title to potentially satisfy agents like the one mentioned verses pleasing others who willingly offered their advice.  As a partially channeled literary work I needed to offer an alternative description to the cataloging of my events.  After all, this was a personal intimate journey not overarching soul teachings directed toward the masses.  In the end, it became a relatively easy decision.  My book is about my search for authentic TRUTH and in the course of my travels, I was confronted with examining the spiritual importance and soul definition of both Dirt and Music.  As for the Bungee Cords, that was a guide’s answer to a difficult and seemingly unsolvable problem.

WHERE CAN PEOPLE FIND OUT MORE INFORMATION ON YOU AND YOUR PROJECTS?

You can read more about “Dirt, TRUTH, Music and Bungee Cords” and leave messages or questions for me at the web site – budmegargee.com