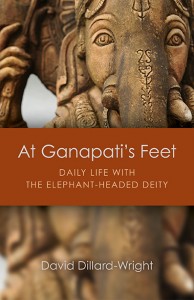 There are many stories of the birth of Lord Ganesh in the Puranas, which are supplementary texts to the Vedas, but they all agree that Ganesh is the deity to be propitiated first, the God of new beginnings. It is customary in India and throughout the world—wherever followers of the Sanatana Dharma can be found—to worship the Remover of Obstacles before any new undertaking, whether before getting married, starting a business, or simply heading out of the house for the day. The Romans had a similar tradition in the two-headed deity, Janus, the God of the threshold. The Romans placed an image of Janus over doorways, and they said prayers to Janus at the beginning of the day and at any important transition in life. Ganesh plays the same role, but, unlike the case of Janus, his cult still lives in the hearts of over a billion devotees. Some of the world’s wealthiest people and the world’s poorest people have a shrine tucked away in an honored place: they all hope for spiritual and material comfort, for the light of true wisdom in a dark world. I know that they find it, when they worship with sincerity and faith.

Some iconography and mythic traditions associate Ganesh with his two “wives”, riddhi (prosperity) and siddhi (spiritual power or attainment). Many devotees pray to Ganesh or Lakshmi with the straightforward intention of gaining material wealth.

This might come across as obscene or shallow at first glance, but several factors should be kept in mind. First, it should be said that those who pray for material rewards because they really need them have every right to do so: no one would begrudge a poor person for praying for food or safe lodging. Next, even those who are already well-heeled and yet still pray for material gain may experience a transformation by turning to Lord Ganesh.

Worship makes the devotee more cognizant of the wealth all around us: the beauty of the natural world, the joys of family and home, the privilege of honorable work, and the presence of realized teachers among us. The desire for wealth becomes a pathway to the divine, a way for God to speak to human beings.

Hinduism teaches that nothing good can come of suppressing desire, for we all get to union with God eventually. The same might be said of the desire for siddhis, supernatural powers. As a child and into adulthood, I was fascinated with ESP, astral projection, and other paranormal topics, and this interest eventually led to more traditional Christian and Hindu devotional practices. Someone may come to Lord Ganesha’s feet hoping to gain some supernatural ability: whether they find it or not will not matter in the end, because Lord Ganesha’s loving presence will be enough.

The fact remains that no one comes to spiritual practices with completely pure intentions—that comes after the fact and not before. Like someone piloting a hot air balloon, the spiritual aspirant (sadhak) tosses off the sand bags one by one, until only silence remains. The “sand bags” in this case are the errant thoughts that constantly trouble the mind: the infinite worries that inevitably arise in material life. Roughly speaking, the difference between Hindu devotional practices and other traditions like Zen Buddhism and philosophical Taoism is that Hindus believe that they can enter into the more perfect meditation of the gurus and the devas. Puja establishes a link between the gross, subtle, and spiritual worlds, so that the devotee benefits from the greater peace and tranquility of those who have gone before. Human beings and gods differ not in kind, but in the degree of attainment, and human beings can become divine with sufficient practice. Paraphrasing a prayer to Shiva in the more ancient form of Rudra, the Rudrashtadhyayi, the deities help to cast off a sluggish state of mind and attain greater degrees of spiritual perfection. Most iconography of the gods includes weapons: in Ganesha’s case often an axe, which provokes this warrior-like mentality. Every ounce of effort must be summoned in the fight against negative states of mind like anger, resentment, sadness, jealousy, and greed.

David Dillard-Wright teaches philosophy and religion at the University of South Carolina, Aiken. He received his Master of Divinity from Emory University in 2002 and his Ph.D. in philosophy from Drew University in 2007. David’s academic research focuses on animal ethics, environmental ethics, and philosophy of mind. After a long spiritual journey, David took initiation into yoga in 2012 under the guidance of his gurus, Swami Satyananda Saraswati and Shree Maa of Kamakhya.

David Dillard-Wright delivers a direct path to spiritual illumination through a series of aphorisms gained through meditation on beloved Ganesha, the elephant-headed Remover of Obstacles. Readers will learn how to cultivate Self-Realization, create positive work spaces, and avoid the pitfalls of the religious life. Practical guides to daily sadhana are included, along with vignettes from the author’s life.