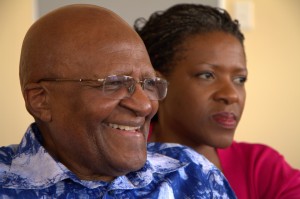 By Desmond Tutu and Mpho Tutu

We all need to forgive, and there are many of us who need forgiveness. The question is, how do we forgive? In their new book, The Book of Forgiving, Archbishop Tutu and his daughter Mpho Tutu share their experiences, the stories of others who have inspired them, and what they have learned about the process of forgiving, to help all of us learn the answer to this. And, they are calling YOU to join the Tutu Global Forgiveness Challenge, to join them in undertaking the path for healing ourselves and our world.   To sign up for the Tutu Global Forgiveness Challenge, Please visit:  www.forgivenesschallenge.com

In an instant, life can change. For Mpho, that instant was in April 2012:

I still can’t describe my own feelings fully. Nausea, disgust, fear, confusion, and grief overwhelmed me. Our housekeeper, Angela, lay on the floor of my daughter’s room. The blood from her brutalized body pooled around her. Yes, the medics confirmed shortly afterward, she was dead. She had been dead for some hours. The days and weeks that followed were a blur of a life upended. The blood and the body are gone, but the event continues to reverberate in our lives. We miss her. In a few short months, she had made her mark on our lives. Her quirks and her kindness had become a part of our story and our family. Her laughter had filled our home. Her strange turns of phrase had become part of our language. Her absence is a sad, scary shadow. Weeping and nightmares, terrors and sleeplessness, brittle silences and nerve-shattering sounds—all of these have become a part of our new reality. The home we had shared is no longer home. We cannot live there.

“Was anything stolen?” the young policeman asked.

A life was stolen. No, more than one life was stolen. There was one dead body, but so many lives were changed irrevocably, snatched away, stolen. So many lives and one happy home gone. Sometimes I feel sad for the murderer, unutterably sad. At other times I feel angry. How could anyone be so vile? How could any person be so brutal? Why Angela? What harm had she done anyone? How dare anyone violate my home? There are moments when the anger turns to rage, and there are moments when I want to strike back!

In one unexpected act of violence and rage, we can experience horror and loss so great we don’t think we can survive.

We see it on the evening news: children go missing, either never to be found or their bodies are found discarded like the day’s trash. We read about it in the newspaper: the torture and rape of women caught in the crossfire of civil war.

We see it on the Internet: classrooms and movie theaters where innocent people are shot at indiscriminately, killed tragically, violently, and senselessly. We hear reports of drive-by shootings and home invasions, gangs retaliating against gangs, and deaths avenged by more deaths. We watch and read and listen, but we do all this from a distance and with a sad detachment at the horrors people are capable of inflicting upon one another.

Then it happens to us. And the horror we once watched from a distance, as if it were a movie or a play, is now in our homes and in our classrooms and in our neighborhoods.In our own families. 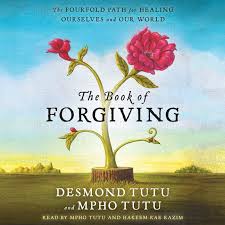 There are times when Mpho cannot imagine ever forgiving the person who brought such horror into her home;the person who forever and indelibly marked her daughters’ psyches and childhoods with a singular and senseless act of brutality and bloodshed. I tell you this because even for people of faith, who believe in unconditional forgiveness, even for people like Mpho and me—people who dare to write books about forgiveness—forgiveness is not easy. It is not easy for Mpho. It is not easy for me. And it is understandable if forgiveness does not come easily for you.

Excerpted from The Book of Forgiving by Archbishop Desmond Tutu and Reverend Mpho Tutu, reprinted with permission by HarperOne, an imprint of HarperCollins Publishers. Copyright 2014.

To sign up for the Tutu Global Forgiveness Challenge, visit forgivenesschallenge.com.

Anglican Archbishop DESMOND M. TUTU won the Nobel Peace Prize in 1984 and the Templeton Prize in 2013, and was the founding chair of The Elders from 2007 to 2013. In 1986 he was elected Archbishop of Cape Town, the highest position in the Anglican Church in South Africa, and in 2009 he received the Presidential Medal of Freedom, the United States’ highest civilian honor. In 1994, Tutu was appointed as Chair of South Africa’s Truth and Reconciliation Commission, where he pioneered a new way for countries to move forward after experiencing civil strife and countless atrocities.

The Reverend MPHO A. TUTU, an Episcopal Priest, is currently the executive director of The Desmond & Leah Tutu Legacy Foundation and has run ministries for children in Worcester, Massachusetts; for rape survivors in Grahamstown, South Africa; and for refugees from South Africa and Namibia at the Phelps Stokes Fund in New York City. She is pursuing a doctorate on the subject of forgiveness from Vrije University, Amsterdam. With her father, Archbishop Desmond Tutu, she has authored Made for Goodness and, now, The Book of Forgiving.