About halfway through what I was calling My Year of Living Dangerously, a year I thought might stretch into permanent retirement with me languishing gloriously on the sofa reading novels and watching the wind shake through the poplars across the street, the matter of growing old came knocking on my door.

It wasn’t what you might think—some bad news about a fall or the death of a dear friend or discovering overnight that I had developed jowls. It was a call, a wake-up and show-up and pay attention call that I had not expected.

It happened on a Sunday morning in August as I was rolling up my sweaty yoga mat at the end of class. A tall, blonde woman I knew slightly asked if we could talk for a few minutes. We huddled in the corner as the next class of eager yoginis rushed past us to stake out their territory.

“I’m turning fifty at the end of this year,” the woman said. “I heard from some friends that you took them on a trip down the Colorado River in April. They told me you did a powerful ritual about becoming elders. I need that.”

Wow, pretty direct, this beautiful woman, I thought. She knows what she wants. We walked outside, and I gave her a couple of ideas for creating an elders circle for her birthday. “Call me if you want any help,” I said.

A few weeks later the woman, I’ll call her Eve, sent me an email. It was a little stiff, the way emails are between virtual strangers. “You inspired me with your suggestion of how I might mark my fiftieth year and prepare for my entry into ‘Cronehood’. I would love to continue the conversation, if you were open to it—this last month has thrown me into some really interesting explorations of how to be in partnership, and yet not lose myself  (that age old thing!).”

She invited me to tea, saying that she had an English garden attached to the back of her little houseboat in San Francisco Bay. She included a photo of a small deck covered with pots of red geraniums and white begonias and a profusion of summer flowers I couldn’t identify. Beyond her floating garden was the dark green bay and the washed out blue of the summer sky. I was enchanted. What an old-fashioned thing to do—sit in a garden drinking tea, and as Eve put it, continue the conversation.

Two weeks later, after yoga, I was in Eve’s houseboat kitchen trying not to smack my head on the sharp angles of her cabinets. She made us a salad of beets and goat cheese and the promised tea. We carried the plates out to her deck where otters were splashing in the water a few yards away and a convoy of white pelicans sailed high above us. We chatted about her family and her life in England and her travels around the world and my work—almost everything, it seemed, except the Cronehood that was supposed to be the point of our getting together. Just as I was wondering how I could politely leave, the conversation took an intimate turn.

Eve confided that she was in a ten-year relationship with a man named Henry to whom she seemed to be giving herself away, and she was getting sick of it. A horribly familiar resentment had set in, which was bad enough, she said, but now something worse was happening, something that really worried her. Her usual cool righteousness was starting to seethe and spurt like an out-of-control volcano. She was sure this was going to destroy her relationship, but she couldn’t seem to shove her anger back down, no matter how hard she tried. Did I have any wisdom to offer (from, presumably, the far side of Cronehood where my sixty-five-year-old self was residing)?

I was actually feeling joy. It looked to me like Eve’s generations-long maternal family pattern of long-suffering Ice Queens was being melted by lava flows of some upwelling energy. “This is a good thing,” I told her. “Something life giving seems to be moving in you, and you need to go with it. Without spilling it all over Henry, of course.”

She grinned. Evidently, spilling it all over Henry had a certain appeal.

Then she leaned forward and asked a question I was to hear many times over the next few years. “Is there a map? I need a map for this new territory I’m headed into.”

A Map for the Territory

Eve’s question stayed with me. We met again for lunch, and then for walks through the hills above her house in Tiburon. Over the next few months, we became friends, hiking through the dry grass of summer as the hills turned into pale wheaty hay and the skies lost their clouds. Once in a while I’d remember how we met and Eve’s question and I’d wonder: Is there a map for growing old?

Early one morning in October, I made my way through a dreary line of commuter traffic to meet Eve at a French bistro in a made-over garage. Once we had our coffee (okay, mocha lattes) and the famous croissants and some strawberry preserves that Eve had brought from home, she surprised me by picking up our original conversation as if we’d been discussing nothing else for the past three months.

“There ought to be a map,” she said, emphasizing the ought as if we’d been debating the matter. “Something that comes after The Feminine Face of God. When you and your friend Pat wrote that book, you said we were coming into a time of massive changes, of ‘spirituality in the fast lane.’ Well, that time is here and everybody knows it. Now what?”

She went on, gesturing with the remains of her second croissant, explaining that she didn’t mean “now what” in general. She meant it in particular about women like her, women in the middle of their lives. 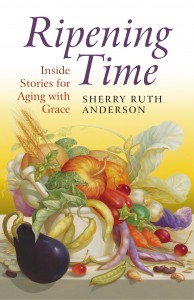 “When sacred feminine no longer sets off shock waves in the culture, and women like me are running things, becoming Secretary of State and Speaker of the House and soon President,” she said, “what is the way for us? I want a map for turning fifty and for the territory ahead, sixty and seventy and eighty. And what about my young women clients who come to me for coaching? They’re in their thirties and forties and if I’m not moving into my own…what do you call it? Growing edge? Growing up? Growing wise? They’ll have no one ahead to show the way. They’ll have nothing to move into, and they’ll keep looking back to their twenties as their best years.” She looked exasperated. “Come on!”

I told Eve I’d think about it and get back to her. As it turned out, I didn’t actually think about her questions so much as feel jolted by them. Have you ever been startled in that way—as if you’re headed to your gate in some foreign airport with all the noise and flight announcements blaring in another language and suddenly you hear your name called on the sound system? And bang, you’re right there, feet on the ground and paying attention.

If you’ve had that kind of wake-up call, then you know the intense effect that Eve’s question about a map had for me. It seemed like an assignment that had my name on it. Whether I could find an answer was another matter entirely but I knew I wasn’t going turn away…