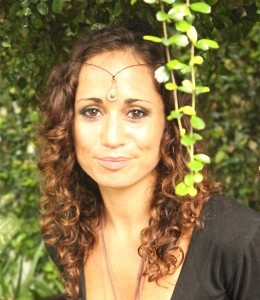 Below is a Q&A with Zahara Jade about her work with P.R.A.Y.

1. What is your film about?

My film sheds light on the most recent evolution of P.R.A.Y. (“PRAY”), the line of talismans I created for the purpose of re-balancing, transformation and truth.  The film focuses on a privileged, underground, sacred ceremony held during June’s Super Moon during which PRAY talismans were blessed by 100+ monks for 12 hours.  It also covers brief history of PRAY, information on the revered lead monk, (black) magic, and Buddhist beliefs in Thailand.

2. What do you hope others will learn from it?

My hope with my film and jewelry is that people gain both insight and access to energies otherwise out of reach to mainstream society (even people whose origins are the East).  Not only was I the only Westerner in attendance at this ceremony, there was a small audience of 30 Thai people, and my friends networked with and related to monks had never seen a ceremony of such magnitude the eve we shot the film.  I hope this short leaves people with a sense of the power, energy and magic alive and well in the East; the transformative capabilities transmitted in these energies via processes surrounding PRAY.

3. What were challenges of making the film?

Given the rare, auspicious, privileged status of this particular ceremony, there were more challenges than I expected; perhaps for reasons beyond every day explanation.  My videographer caught dengue fever the eve of the shoot, so I shot most it.  The attachment to his tripod mysteriously went missing hours before the shoot, so camera stability was an issue.  It was my idea to be portrayed in the film more, but backup videographers could not/ did not make it and most of the footage shot by my sweet Thai friends was out of focus.  On top of everything, cameras were banned from the temple prior to the ceremony.  Everything flowed perfectly, because my position as token, honorary Westerner, allowed for shooting during active prayer, and once recognized went overlooked by the monks.

4. Where did the idea of capturing Eastern energies in the form of talismans come from?

When I transitioned into metalworking and ideas of the Kris sword metals, related ceremonial blessings, and Eastern powers evolved, this provided the perfect foundation for my vision.  PRAY is the combination of my lifelong desire to help others with an outlet for my creative passions.  PRAY allows me to live a soul-filled, awakened, connected life while guiding others to tap into their higher self purpose.

5. How do you connect with this energy and how can we access it ourselves?

It has been a lifelong process that began with cultivating my own energy.  Healing myself from an autoimmune disease, I explored alternative and Eastern energies while in the West, and subsequently spent years traveling the Far East studying ways to access higher states of self-realization.

Everyone has the potential to balance, heal and achieve self-actualization inside.  However this is increasingly difficult in today’s disconnected, imbalanced, dis-eased, synthetic society.  PRAY provides a highly charged, potent means by which the wearer can conveniently access energetically balanced, awakened states with ease.  It is my recommendation that everyone receiving a PRAY talisman fuses their own energy, intentions and power during an intention setting ceremony (ABOUT page).  Video found at: www.purerockangelyogi.com

6. Do you have plans to produce a longer film, perhaps a documentary showcasing your journey?

Yes, that is in the works.  More ceremonies and also footage to shoot in the different energetically rich locales.  For another look into PRAY’s backstory via Kris swordmakers and Kickstarter video, please visit: http://www.youtube.com/watch?v=FnWC6zsA718