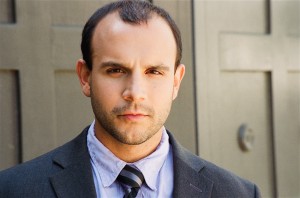 This movie review is written by Sean A. Mulvihill

“What would our Earth be like if man would understand that he and the Earth are one?”

At its most essential core, Oliver Hauck’s new feature film, The Blue Jewel: A Documentary about Planetary Healers, can be described as a love poem to humans from the Earth herself. What’s interesting about this film is that its profiled mystical healers are leaders in a truly growing worldwide movement of planetary healing, and the movie, from Starseeds Productions, is one of a growing number whose mission is to heal the Earth. And it is an important mission, as director Hauck says, “…there is no Earth number two, there is no Earth number three, there is only one Earth for all of us.”

The film, which is episodic in nature, blends gorgeous aerial photography with interviews of profiled healers and teachers who discuss their diverse methods for healing the planet and its inhabitants. One key teacher in the film is the channeled voice of Gaia herself, speaking in soothing tones to us through the medium of the lovely Pepper Lewis. Gaia gives us humans the impetus to take the reigns of the further evolution of the Earth, comparing humans to the transistors in an old radio set: without them, none of the other technology works.

Another teacher, Gudrun Miller, talks about inter-human relations as the key to planetary healing saying, “Forgiveness…unburdens you, the forgiver.” She and her husband, David, and are creating “Groups of 40” people in cities around the globe who use mental visioning to protect the consciousness of their metropolitan area.

Perhaps the most delightful interview in the film comes with German organic farming couple Ignaz and Johanna Leitner. They speak of how their cows kept getting sick until they found harmony in their community relationships. Johanna also speaks eloquently of her desire for everyone to truly experience a rose blooming, and through experiencing a rose, we can become blooms ourselves.

Some of the other teachers include a psychologist (Dr. Roger Nelson) who works with group consciousness affecting random number generators, and a Hopi Native American, Ruben Saufkie, Sr., who teaches gratitude for Mother Earth.

The film’s breathtaking aerial views and music by “Beyond” (a group which includes Tina Turner), are also accompanied by amazing 3-D computer graphics of the Universe, beautifully created by editor Tom Schumacher. 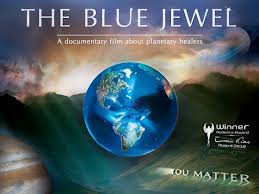 The Blue Jewel can be characterized as a meditation which has little nuggets of wisdom for us to digest, well spaced out with time for getting in touch with one’s breathing and beingness. The implied main question the film raised in my mind is: “How powerful are our minds exactly? How much of my/our world is within my/our control?” One interesting episode of the film is director/producer Hauck’s experiment to use group telepathy to produce rain in the Sahara Desert at a specific time. The results are fascinating.

Those who are looking for story, conflict, peril, or a traditional protagonist will be disappointed by this film, but those who are earnestly seeking alternative views on healing the globe, mainly through personal inner work, will be enthralled by this feature length offering.

I had a chance to talk with German director Oliver Hauck before and after the U.S. Premiere of the film in Beverly Hills, and he had the glow in his eye of one who has found the work which he was born to do on this Earth. He spoke of how his mission to make this project attracted all of the right people at the right time. And I couldn’t help but think about other people who might be reading this article, and how they might want to help heal the globe by creating something, but might be confused as to what they can do, or are simply caught up in the day to day of life: paying bills, working, running errands, surfing the web, exercising, sleeping and then doing it all again the next day. They don’t perceive that they have time to go out into nature and say prayers in a big circle. So what can this busy city dweller do to help out? At the film’s finale, David Miller says, “Everyone on the Earth has seen those beautiful pictures that the astronauts took from the moon and those images are so beautiful. When we [first saw] those images we [began to call] the Earth the Blue Jewel…” He encourages us to meditate for a few minutes each day on the beauty, harmony, and balance which make up our world. This simple method can help to heal the globe. Surely we’ve all got a few minutes a day for that.

Sean A. Mulvihill is the President of Hollywood Happiness Studios and can be reached via www.hollywoodhappiness.com