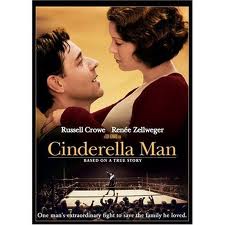 Inspirational sports movies are a road that has been well traveled by directors for years. Films like Rocky and Rudy opened the floodgates to a stream of low quality inspirational sports films, which should be avoided like the plague. Occasionally a film comes along that manages to dodge the cliches and present a remarkable inspirational story with three dimensional characters, great dialogue, fantastic settings and actors. One such film is “Cinderella Man,” directed by Ron Howard and starring Russell Crowe and Renee Zellwegger. This movie touched me deeply and inspired some serious changes in my life.

What is “Cinderella Man” About?

This film is based on the life of the early 20th century boxer, James J. Braddock. This man was a talented and accomplished fighter during the height of the Great Depression. This film follows the ups and downs of his life and his family’s struggle with poverty. All throughout the film, Braddock has a calm dignity no matter what his circumstances, and faces death and hardship regularly to make sure that his family has a place to sleep and food to eat. While he accepts charity from the government, when he gets back on his feet he pays the money right back. Eventually his persistence pays off, and he wins a very big fight against the world heavyweight champion.

How is This Film Inspirational?

I took a number of lessons from this film that have helped inspire me to work through hardships I may face in life. James J. Braddock exhibits a calm dignity and style through the roughest situations and keeps himself together no matter what faces him. His steely determination at the height of the worst economic crisis this country has ever seen is awe inspiring at times, especially considering that before the Depression hit Braddock was a relatively wealthy man. When the market collapsed, he and his family were thrown into poverty. Yet while his physical assets and wealth were taken from him, he never loses sight of what was really important. Essentially, Braddock never really becomes poor because he never feels that he is.

Braddock’s undying love for his wife and children is also a very inspirational thread that runs through this film. Everything Braddock does is for his family. Everytime I watch this film I am inspired to live more for others and to make sure that everyone around me is as happy and comfortable as possible, regardless of the cost to my own happiness or status. “Cinderella Man” has affected me in a number of positive ways. This film may be inspirational for anyone who happens to be going through a hard time. The movie helps to remind us that no matter how bad we may have it, someone else could be much worse off. These factors combine to create an inspirational film for the ages. “Cinderella Man” manages to tug on your heartstrings while at the same time showing you an important message about life, family, and hardship.

This is a guest post written by Jefferey Cavanaugh. Jeffrey is an avid movie watcher and film buff in Hollywood CA. When Jefferey is not contributing to career resource sites such as DegreeJungle.com, he works as a writer full time and also spends a great deal of time watching film, television and stage productions.