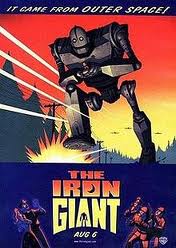 “You are what you choose to be. You choose. Choose.”

The Iron Giant is an animated film that has made a big impact on my life. That quote is the theme behind this great cartoon. I love the fact that this movie is all about choices. The Iron Giant may be a machine, created by someone, but he does not have to become the thing he was created to be. Because he has a soul, he can chose to become whatever he decides to be.

The little boy that befriends him, Hogarth, can also decide what he wants to be. He can be the coward and run away from his problems or he can face them, head on. This movie is all about how choices affect our lives. The choice to kill or not kill.The choice to get angry or to be kind.The choice to leave the world behind or become a part of it. Every choice determines where your life goes and who you become as a person.

That is why I found this movie so inspirational. It is just a cartoon, and yet it is more. Set during the volatile Cold War era of Sputnik and fears over the Communist agenda, this movie highlights the importance of everyday choices in the world. One person can change everything.

Kent, the overzealous government official, nearly destroys everything because of his rage and stupidity. His one choice almost destroys a whole town. The Giant and Hogarth’s bravery save everyone. Even the reclusive junkman that has turned his back on the world is brought out by the robot and child’s choice to be more than what people say they are.

The fierce independence, the determination to be successful despite the odds makes this movie one of the most uplifting and inspiring ones I have ever seen.

This movie review is a guest post written by Monta Fleming.  Monta the mother of three children serves as an Expert Advisor on multiple household help issues to many Organizations and groups, and is a mentor for other “Mom-preneurs” seeking guidance.  She is a regular contributor of “gonannies.com”.  You can get in touch with her at montafleming6Atgmail dotcom.