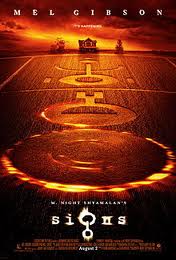 This article is a guest post by Dana Viktor.

When I was younger, I had a strong belief in god. Like many people, that belief wavered as I grew older and faced a number of hardships. I don’t know if my faith faded because I grew older and learned more about myself and my true beliefs, or if I really did become lost because of the troubles that I faced.

My journey is one that many share. It has been written about in poems, in novels, and even movies. One movie made in recent years explored this theme particularly well: Signs (http://www.imdb.com/title/tt0286106/) (2002) by writer and director M. Night Shyamalan.

The movie, starring Mel Gibson and Joaquin Phoenix, explores the loss of faith of a small-town preacher after his wife is killed by a driver who falls asleep behind the wheel. This deeply moving story is told against the backdrop of an alien invasion, which is revealed through a series of mysterious crop circles.

While the story may sound like the makings of a sci-fi blockbuster, it is actually an intimate and poignant look at the spiritual journey of one man who had a close relationship with god, lost it, then found it again.

Watching the movie, I saw a lot of my own spiritual journey in this man’s story. In this preacher’s darkest times, he felt disconnected from his faith and ridiculed the notion of the existence of a god at all. While trying to make sense of the alien invasion and what would become of his family, he tells his brother that there are two types of people: Those who believe that everything happens for a reason (presumably per god’s plan) and those who think that everything is up to chance.

When the movie starts, he has resigned himself to the notion that everything happens by chance. When I started watching the movie, I was of the same belief.

Yet the movie reaches a powerful climax in which seemingly inconsequential details of the story come together to create a meaningful resolution. By the end of the movie, the preacher (played by Gibson) comes to the conclusion that all things do happen for a reason (even seemingly tragic events like his wife’s death) and has found his faith again.

While I found the movie’s resolution to be very powerful and moving, I didn’t quite gain my faith back because of it. I did think about the possibility of “signs” in my own life and felt a bit more open to the possibility of there being meaning and order to the events in our life. I don’t know that I found any “signs,” but the idea stayed with me long after the movie ended.

***********
Dana Viktor is the senior researcher and writer for duedatecalculator.org. Her most recent accomplishments include graduating from Ohio State University with a degree in communications and sociology. Her current focus for the site involves studies regarding ovulating and ivf treatment.