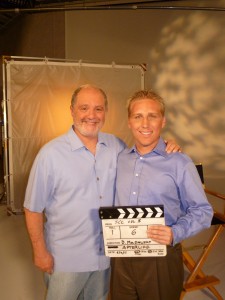 Spiritual Cinema Circle paid for my airfare, hotel, food, and even provided me with a limo driver to pick me up at the airport, hotel and take me back to the airport. Thursday morning, I arrived at their studio at Gaiam unsure what to expect. But, from the moment I arrived to the moment I left, everyone there made me feel incredibly welcome and at home.

I was able to meet all of the great people and staff who make Spiritual Cinema Circle work so well and even took a tour of Gaiam (Thank you Suzanna and Jessica!). Then, Stephen Simon walked in the studio and I started to feel kind of nervous. Stephen Simon is an Academy Award winning producer, one of my favorite filmmakers and someone who I have always admired. I remember watching his movie, What Dreams May Come, a few years ago and being very inspired by it. So, it was a bit surreal for me to actually meet Stephen in person. However, he greeted me with such a friendly and down-to-earth welcome that I felt like I could just relax, be myself and enjoy the whole experience. 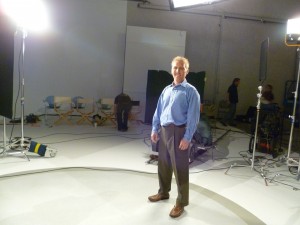 After getting ready to be on camera, I was getting more excited for the actual movie discussion which would be filmed and distributed to all of the members of the Spiritual Cinema Circle. None of this was rehearsed or prepared which made the actual questions and conversation that much more lively, fresh and authentic.

Stephen, Janet and I chatted about 4 films for an upcoming volume of the Spiritual Cinema Circle. I especially enjoyed discussing Janet’s film Fly Away, which is about a single mother raising her autistic daughter. I was deeply touched by how the movie honors the humanity of the autistic daughter and shows that the mother and daughter’s loving and very real bond transcends the difficulties that autism can create between two people. Having the chance to talk to Janet about how her film was inspired by her experiences raising an autistic son made the whole experience that much more meaningful for me.