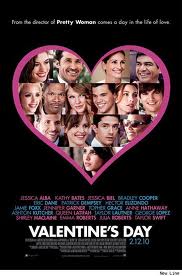 “Valentine’s Day” movie was the number one film at the box office this weekend a year ago bringing in $52.4 million. The star-studded cast reached out to all age groups and demographics with big names such as Julia Roberts, Jamie Foxx, Ashton Kutcher, Shirley MacLaine, George Lopez and Taylor Swift. This diverse group of celebrities helped bring home the movie’s message that no matter what your age or background is, relationships can be kind of tricky, but if you hang in there you can find true love. It is a heartwarming, funny and upbeat film filled with themes surrounding serendipity, acceptance and finding love. It’s not surprising that audiences liked “Valentine’s Day” so much and it opened at the No. 1 spot.

However, if you read “Valentine’s Day” movie reviews from the critics you will hear how bad or boring it is. For example, here’s what Roger Ebert said,

“Valentine’s Day” is so desperate to keep all the characters alive, it’s like those Russian jugglers who run around, trying to keep all their plates spinning on poles. I won’t even attempt to describe the plot.”

“Valentine’s Day” reveals just how out of touch most of the movie critics are with mainstream audiences and the type of movies that people actually want to see. The critics gave “Valentine’s Day” poor reviews probably because it lacks the type of cruel sarcasm, bitter irony and gross cynicism that appeals to most of them. Fortunately, “Valentine’s Day” proved the critics wrong and showed that a romantic comedy with uplifting messages about love, humor and relationships can have great box office success and reach a large audience.