Archive for wake up trailer 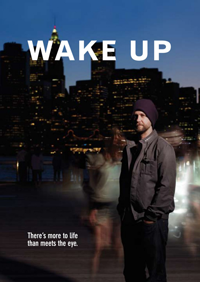 Jonas Elrod was leading an ordinary life until he woke up one day to a totally new reality. He suddenly could see and hear spirits of dead people, angels, auras and extraordinary energy fields.

The documentary Wake Up follows this fascinating story of an average guy who inexplicably developed the ability to access other dimensions. Initially skeptical of his own extrasensory perception, Jonas feared he might have some psychological, physical or emotional impairment that was causing him to apparently see beyond science’s current three dimensional explanation for reality. However, after visiting with doctors, physicians, and psychiatrists, Jonas received a clean bill of physical and mental heath and also reassurance that he was not suffering from delusional thinking, schizophrenia or some other type of psychological disorder.

So, what was it? Why was it happening to him? One thing was certain for this 36-year old man — life as he had known it would never be the same. With his loving but skeptical girlfriend by his side, Jonas crisscrosses the country as he searches for answers and delves deeper into this thrilling world of the phenomenal and spiritual. Along the way, he encounters an amazing group of religious teachers, scientists, mystics and spiritual healers who help him piece together this intricate puzzle.

Most people who claim to have the type of experiences that Jonas has usually hold them self out as something special or as some type of glorified sage, mystic or prophet. However, Jonas is clearly a regular guy who takes a very nonchalant and inquisitive approach to trying to figure out why he has been gifted or possibly cursed to see spirits, angels and beyond our three dimensional perception.

This is refreshing, entertaining and inspiring to watch. While we may be hesitant to acknowledge these unusual experiences to other people or even to ourselves, I think most people have spiritual experiences similar the ones Jonas had — whether it is feeling the love of a family member who has passed away, gaining insight from unexplainable sources of inspiration or simply experiencing an unmistakable moment of synchronistic grace. Wake Up is an invitation to accept that these type of phenomenon do occur, while still being grounded and attentive to the activities of our normal, everyday lives.

For more information, you can visit the film’s web site at http://wakeupthefilm.com/