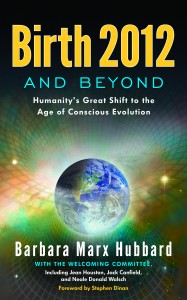 We are being presented with the greatest opportunity that humanity has ever consciously faced together: the effort to co-create a planetary shift in time to avert global catastrophe by helping humanity cross the gap from “Here”—our current breakdowns—to “There”—our future of infinite possibility.

Why is this invitation so urgent?

Because our current condition of over-growth in our finite Earth system is simply not sustainable.

We will either evolve toward a more sustainable, compassionate, and creative global system, or we face the real possibility of devolution and destruction of our life support system and of much of life on Earth—within our own or our children’s lifetime!

This dangerous reality is motivating us to enter into what I call the first age of conscious evolution—that is, evolution by choice and not by chance. What is being required of us is to learn to co-evolve with nature and co-create with Spirit.

Why do I believe that the timing is so urgent? Why now?

For the first time in our conscious history we are being given the opportunity to guide and ease our transition to the next stage of evolution. This situation is new for humanity, for we are the first Earth species to consciously face evolution or extinction.

This condition is new for humanity, but it is not novel for the universe. Evolution operates by “punctuated equilibrium,” long periods of slow change, punctuated by apparent sudden jumps. For billions of years, nature has evolved through creative leaps, progressing from energy into matter, to planets, to primitive life, to animal life, to human life. When we look back to our 13.7 billion year history, we can see nature’s lessons as recurrent patterns:

These lessons are a great wake-up call for the maturation of humanity.  When a system reaches a “chaos point, it tries to right itself by going backward to the old; this is why we see reactive movements everywhere now. An evolving system must seek out new structures and systems toward a new configuration—or face rapid decline. According to system theorists, small positive fluctuations in a sea of social chaos can jump the system to a higher order.

The opportunity being offered to us is to co-create positive innovations and new ways of being, behaving and living as a new humanity. The new good news is, we are now intentionally co-creating humanity’s Great Shift to the age of conscious evolution. Now it is our turn in evolutionary history to co-create a new society, a new humanity, a new Earth.

December 21, 2012, has been identified by Mayan prophecy as the end of a long cosmic cycle. Therefore, Dec 22, 2012, has been selected to be our planetary “due date,” the new Day One for the next era of evolution. 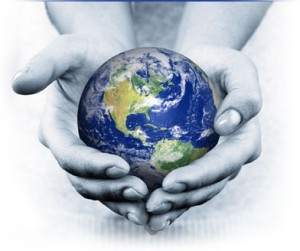 A profound awareness of an impending planetary shift came to me in 1966 as a deep personal revelation, when I knew nothing about the Mayan calendar or other prophecies. This event was a flash of expanded reality that I call the Planetary Birth Experience. At that moment my inner knowing understood these words in my heart: Our crisis is a Birth. I saw that what all the great avatars and mystics of humanity have told us is true: We are one; we are whole; we are good; and we are being born as a Universal Humanity within a universe of immeasurable intelligence, energy, and dimension. In this vision, I saw that we are a product of universal evolution, from the flaring forth after the Big Bang to the historical present, and I was guided to go tell the story of our birth. The amazing part now is that everything I experienced in that epiphany so many years ago is now happening in real time! 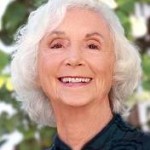 The preceding article is adapted from the new book Birth 2012 and Beyond: Humanity ’s Great Shift Toward the Age of Conscious Evolution By Barbara Marx Hubbard and is reprinted with permission of Shift Books ©2012 .

A world-renowned visionary futurist, evolutionary educator and inspiring speaker, Barbara Marx Hubbard is the author of six acclaimed books that communicate the new worldview of conscious evolution. She is the co-founder and chair of the Foundation for Conscious Evolution. In 1984 her name was placed in nomination for the vice presidency of the United States on the Democratic ticket . She is currently co-producing with The Shift Network a global multi-media event entitled, “Birth 2012: Co-Creating a Planetary Shift in Time” on Dec. 22, 2012 which aims to unify 100 million people worldwide in coherence and social synergy to birth a new “evolved” era and “universal humanity.” www.birth2012.com

They have their second event scheduled for February 4, 2012 where YOU can join them and others from around the world to help establish GATE and further their vision/mission of “Transforming the World by Transforming Entertainment and Media.”™

While GATE will be presenting a variety of programs, some for members only and others open to the public, there are two major annual events in February that they hope you’ll attend:

This evening event will be a celebration of transformational entertainment, media and arts — an exploration of the new, emerging genre, and an inspiration to share the energies of your personal transformation with the world through your work.

Presenters and performers include –

GATE 2 is a Benefit Event — proceeds will endow the organization, providing most of the operating funds for their next year. Advance ticket sales only! Limited seating. For the whole line-up, more information, and tickets, visit:

GATE StoryCon will examine the role of story in promoting personal, social and global transformation. Story is explored from a variety of perspectives, with special emphasis on the human transformational journey — the transformational arc: life-death-life.

GATE StoryCon is also a Benefit Event with proceeds helping to endow the organization for our next year. Advance ticket sales only! Limited seating. For the whole line-up, more information, and tickets, visit:

Below is a video of Jim Carrey speaking at the first GATE event about how he believes part of his purpose as an entertainer is help relieve suffering.

If you would like to sponsor a post on Spiritual Media Blog, please email us at Assistant@SpiritualMediaBlog.com

–
A rare gathering of some of the greatest thought leaders of our time, such as Jack Canfield, Debbie Ford, Michael Beckwith, Barbara Marx Hubbard and Mallika Chopra took the stage at UCLA’s Royce Hall on August 31, 2010. The inspiring program, A Global Call to Conscious Evolution: Our Moment of Choice, was designed to align our collective vision by presenting ideas for sweeping change through the media, business, social activism, politics, the sciences, healthcare and the environment. Televisionary, Tamara Henry, was there to have some deep conversations with the presenters before they entered the theater. You can watch those interviews in the video above.

presents cutting edge perspectives on humankind’s potential to create a positive future for the Earth.

Barbara has stated her intention to dedicate the next three years of her life serving as a global voice for the collective emergence – calling us all to a planetary awakening by the end of 2012.

As part of the promotion for the movie, Barbara Marx Hubbard is allowing you to become a co-producer of Visions and have your name placed on the credits of the movie and all future movies in the series. You can see how by going to: www.barbaramarxhubbard.com/mini-sites/Public/Visions/Donate/