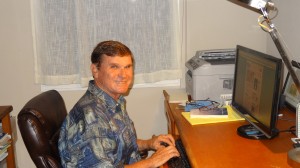 I recently had the chance to interview Michael Tymn about his new book Dead Men Talking: Afterlife Communication From World War I. Below is a copy of our Q&A…

1.  Why did you write Dead Men Talking: Afterlife Communication From World War I?

I didn’t really write it. I am more editor than author of the book. I wrote the Preface, Introduction, and offered some commentary in the five chapters, but the book is essentially an abridged anthology of five different books coming out of World War I. My original plan was to abridge just Raymond or Life and Death, Sir Oliver Lodge’s 1916 best seller about communication with his son, Raymond, who was killed on battlefield in Ypres in Belgium on September 14, 1915. Since the 100th anniversary of Raymond’s death is coming up next year, I proposed to Jon Beecher, my publisher at White Crow Books, that we collaborate on an abridged version of Sir Oliver’s book, which is some 400 pages. Of course, the book is now in the public domain and I thought I would narrow it down to the key messages and make it about half its original size. But Jon said he preferred more than just the Raymond book. Thus, I selected four other books –

Thy Son Liveth: Messages from a Soldier to his Mother

Rolf’s Life in the Spirit World

2. Is there a common thread among the five books?

Raymond, Bob, Claude, Thomas, and Rolf were all casualties of the Great War. The first four died on the battlefield, while Rolf died in training camp before he reached the battlefield. Still, he was a victim of the war. All five began communicating from the Other Side after their transitions.   What they had to say is fairly consistent – that there was some confusion initially after their deaths; that they gradually awakened to the reality of it all; that it was nothing like they had expected; that it was not the humdrum heaven or horrific hell that they had heard about; that they were all active; that there were many levels or planes and each person gravitates to the level he has prepared himself for. From where they were, they were continuing to learn and evolve to higher vibrations toward the Godhead. For the most part, however, at least in the higher realms, it is beyond human language.

3.  What are you hoping people will take away from the book?

Even people who believe in an Afterlife tend to see it as a very boring place – not much more than floating around on clouds and strumming harps while praising God 24/7. Thus, the fear of death is very much present and the repression of that fear by escaping into the unreal world offered to us in the movies, on television, and on the Internet becomes a way of life. As I see it, this escape results in extreme materialism, even hedonism, and is the primary cause of all of the turmoil and chaos in the world today. Once we see death as a transition into a greater reality, the need to escape into the unreal world diminishes. The stories of these five combatants can help people see a more exciting and dynamic Afterlife than that offered to us by orthodox religion, one that we need not fear, unless, of course, we have not properly prepared for it.

4. Are you implying that there really is a hell?

The messages suggest that we are not judged either “righteous” or “wicked” as most religions teach. Rather, we judge ourselves and gravitate to the place we have made for ourselves based on what has been called a “moral specific gravity.” It is a matter of degree.   Those who have led negative lives might find themselves “earthbound,” not even realizing they are dead, thereby experiencing a “fire of the mind,” sort of a like a bad dream. That’s hell. However, we are told that it is not eternal and that souls in this condition can pull themselves up and evolve spiritually to higher realms.

5. How can you not know you are dead?

Do you know that you are “alive” when you are dreaming at night? I think it is the same thing. But a better example might be a good movie. Most people can get caught up in a good movie and forget that it is a movie. They begin to identify with the characters and to experience the emotions of the actors. The emotions may even stay with them for hours after the movie is over. People who get so absorbed with the material life and have no concern for the spiritual are like those who get caught up in the emotion of the movie.   It takes time for them to return to “consciousness” after they have “died.”

6. Many people say we should be living for the present and not concern ourselves with some far off afterlife. How do you answer them?

When you are young, raising a family, and have an interesting career, that may very well be the case, but, still, the thinking young person might stop and ask what the purpose of it all is. When our kids are on their own and as we leave our jobs behind, we are more inclined to ask what it all means, whether we are all just marching toward extinction. Some might see the purpose as making it a better world for future generations, but if they think too deeply, they begin to ask, “to which generation full fruition?” and “to what end the progeny?”   That Utopia that future generations are headed for begins to sound like the world Nero was experiencing when Rome burned. As pioneering psychologist William James stressed, one cannot effectively live in the moment without some regard for the future.   The more we try to repress the idea of dying and death, the more we escape into that unreal world, the fantasy world.

7. Why did you focus on Afterlife Communication From World War I as opposed to other time periods or even right now?

My other books are more general.   I focused on World War I on this one because the 100th anniversary of the Great War was just ahead as I wrote the book. The war began on July 27, 1914 and ended November 11, 1918.

9. Why are some people able to communicate with their loved ones after they die and other people are not able to?

I think it is more a matter of people on this side not being open to spirit communication than it is the ability of the discarnates not being able to communicate. If a person doesn’t believe in such spirit communication, as is the case with the majority of people in today’s world – either because they are scientific fundamentalists or religious fundamentalists – he or she is simply not going to hear from those in the spirit world. I suspect that the departed try to get through to them, but the messages are ignored or written off as hallucinations, fantasy, whatever.

10.What sort of reaction have you received from people about your book?

The book hasn’t been out long enough to get any real reaction. I hope the reaction is the same as with my book, “The Afterlife Revealed,” as I have had many people tell me that it is the best book they have read about the Afterlife.

Amazon.com – both US and UK.