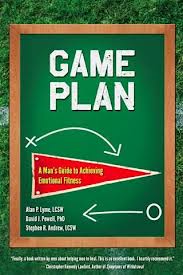 is a practical and provocative book packed with lessons your dad never taught you about living life to the fullest, free from addiction and other self-destructive behaviors. It was written by Alan P. Lyme, LCWS, Stephen. R. Andrew, LCSW, and David J. Powell, PhD. I recently had the chance to interview them about their book. Below is a copy of our Q&A…

1. The authors have mentioned they have a combined sixty-plus years of experience helping men recover from “being male”. What does that mean? And, why do men need help recovering from being male?

The traditional roles men have played (strong, impenetrable, without feelings, etc.), have been at great cost to men (and women). These roles continue to be held as the behavior of “real men”. The expectations of men “being men” (or as often say, “boys will be boys”) have contributed to men dying younger than women, high suicidal rates, violence against other men and women, criminal behaviors, etc. We seek to help men recover from some of these self-destructive roles men place on themselves and society expects of them. Generally speaking, by the time a man asks for help he is in some serious emotional, physical, or relational trouble. We hope to spread awareness, to prevent the need for men to stoically shut down.

2. How do you help a man recover from being a male?

The first step in recovery is to acknowledge the problem and the costs of these expectations about men. It is not that we want men to stop being men, or to be more like women, but to be more free from the destructive habits and roles of men. The second step is let go of these roles, to define healthier roles a man might play, to work with partners, families, friends, and communities to establish healthier images of what it means to be a man today.

3. How do you think differences in biology, such as men having more testosterone, account for traditional gender roles and men’s behavior?

Traditional gender roles certainly have had a positive impact on society. Biology does play a vital role, or as the old-fashioned phrase went, “viva la difference.” The problem is when nature becomes deterministic, when societal roles become cast in stone based on biological expectations, i.e., women are the only ones who can be caregivers because of their higher estrogen levels; men need to be strong, adventurous and brave because of their testosterone levels. Biology does not determine societal roles alone. Nature and nurture go together.

4. How are traditional gender roles helpful and how are they hurtful?

Traditional gender roles have been very helpful in a family’s or nation’s ability to defend itself, provide security and safety, and perpetuate the role of families and childbearing. Without these traditional gender roles our civilization would have disappeared millennia ago. However, any role that becomes deterministic and cast in stone can become a barrier as society grows, changes, expands. The once traditional role of men and women may have worked well centuries ago, but in a post-modern world, men and women are seeking to be freed from traditional gender stereotyping. For example, a woman growing up in rural Kansas in the 1950s, would have been taught that she could be a school teacher, a nurse or a secretary. These were acceptable roles for her to play, as part of her societal contribution leading to her “rightful place” as a mother some day. However, as the Women’s Movements of the past decades have shown, these are not the only roles women can fulfill. Today, girls are told they could become a corporate CEO or US president. As times change, so do traditional gender roles.

5. How can a man balance being nice and sensitive with still having a strong backbone, being assertive and taking care of his needs?

Being strong and assertive does not necessarily contradict being nice and sensitive. Some of the strongest men in history have also been sensitive, caring, and compassionate. Let me introduce you to Ghandi who stood up to the British and fought non-violently against prejudice. Equally so, Mother Teresa, in a frail body, fought like a tigress for the needs of the poor around the world. Being assertive, nice, and sensitive are not gender-based characteristics. They are qualities that all great men and women have. This is not a case of either-or but both-and qualities.

6. How can a man balance being assertive and protective without being too aggressive or controlling?

This is a classic question. Where is that line between standing up for yourself and being overly aggressive? The answer, I believe, is found in what you are standing up for…the principle on which you stand. Was Martin Luther King being aggressive when he stood in the doors of schools opposing segregation or was that being assertive? Great men (and women) throughout history have defined where that line is–with the critical question always coming from the wisdom of the Buddha, “Is it true? Is it kind? Is it necessary?” when one can answer those questions affirmatively, they will find that balance between assertiveness and aggressiveness. “Does it harm others? Why are you doing this? Will good come of it?”

7. How can a man express his emotions without sounding like a wimp?

Here again we come back to gender role stereotyping. “Never let them see you sweat. real men don’t cry. Suck it up.” To express one’s emotions runs the risk of being called a wimp. After all, only women cry. On the other hand, to be a SNAG (sensitive, new age guy) does that mean he has to “get in touch with his feminine side” and cry like women, or express his feelings as women do? Is it possible that men have similar feelings as do women, but express them differently? Why does expressing one’s emotions equal “wimp hood?” Maybe strength is truly in being free to express oneself in whatever form is meaningful to the person.

8. Do think men are at risk of not honoring their masculinity or diminishing the value of their innate masculine traits when they attempt to be too nice, sensitive or “embrace their feminine side?” Why or why not?

Why do we make this into an either-or question? Why do we have to choose between expressing our so-called “innate masculine traits (whatever the heck that means) and being too sensitive? Sexism (or racism, or agism) occurs when whatever gender, race, or age group is “expected” to act a certain way… “all blacks are….” “all women are emotional….” “All men are strong… and don’t show fear, doubts, emotions….” “All Muslims are violent and ….” “All Christians are bigoted and homophobic.” Stereotyping of women was acknowledge as a societal issue in the 1960s Women’s Movement.

Perhaps true women’s liberation will occur when both genders are free from sex-role stereotyping, while also acknowledging “viva la difference,” our inherent biological differences. Isn’t that the true struggle of humankind? To acknowledge we are all different without assigning someone to a stereotype.

This books opens us to the essential questions of today, what does it mean to be a man in the 21st century? What gender biases and sex role stereotypes need to be addressed as societal norms change? Naisbitt in Megatrends wrote, “The 21st century will be defined not so much by our technology but by our ability to see what it means to be human (both male and female).”